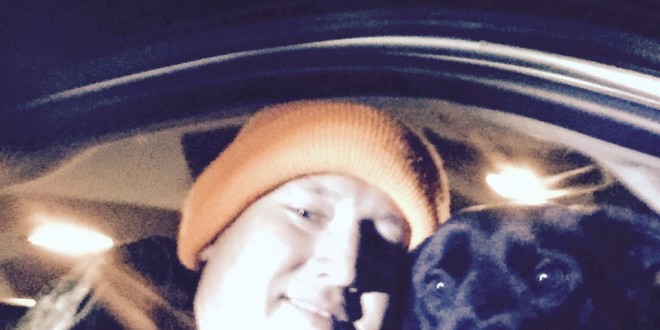 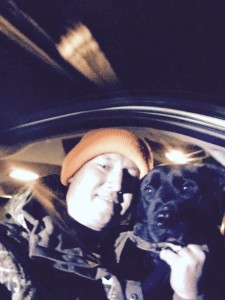 This was the case on the evening of Friday, January 8, 2016. Indiana State Police Trooper Ted Robertson was off-duty when he received a request to rescue a stranded black Labrador retriever on the east bank of the Wabash River directly east of Cayuga’s Duke Energy Power Plant. The Duke Energy Plant is in Vermillion County and the dog was in Parke County separated by the Wabash River. Without hesitation, Trooper Robertson hitched up his personal boat, a 17 foot Lund fishing model, and headed to the public access boat ramp near Lodi (Parke County) along State Road 234. At the ramp, he met Don and Sandy Knauer, owners of the pet named “Diesel” and friends Zeke and Renae Norman. Renae is the person who requested the help from Trooper Robertson. The boat was launched and the group quickly navigated south in the darkness for about one mile with the time nearing 7:00p.m. Once they reached the area adjacent to the power plant and after calling “Diesel” for a mere few seconds, “Diesel” enthusiastically appeared at the boat and was rescued.

According to the Knauer family, a thunderstorm had frightened “Diesel” on December 26, 2015 and the pet fled the family home through an unsecured door. The family posted flyers around the town of Cayuga and pushed the information out through social media, to no avail. Then, on January 8th, while working near the west bank of the Wabash River, Duke Energy employee Zeke Norman, noticed a black dog barking on the east bank of the river. He provided the information to his wife Renae, who then notified the Knauer family that the black dog may be “Diesel”. With the high water of the river and the falling temperatures, the family was working feverishly to secure a rescue for “Diesel”. After contacting various law enforcement agencies and organizations and not finding help, Renae contacted Trooper Robertson directly and he immediately responded without hesitation.

As the result of this endeavor, the Knauer family sent a letter of appreciation to the command staff at the Putnamville Post. It was never determined when or how “Diesel” arrived on the east bank of the river, as the family resides on the west side of the river. 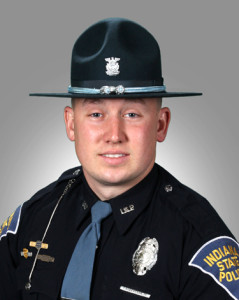 “Trooper Robertson’s actions and willingness to use his personal resources to secure the rescue of “Diesel” goes beyond the norm and exemplifies the meaning of a public servant”, commented Lieutenant Dan Jones, Commander of the Putnamville District.

I play on the radio from 7 am -1 pm weekdays on 98.9 FM WYRZ and WYRZ.org. Follow me on twitter @WYRZBrianScott or e-mail me at brian@wyrz.org.
Previous Hoosiers can donate to public education on tax forms
Next Naked Pedestrian Struck on I-465 on the West Side