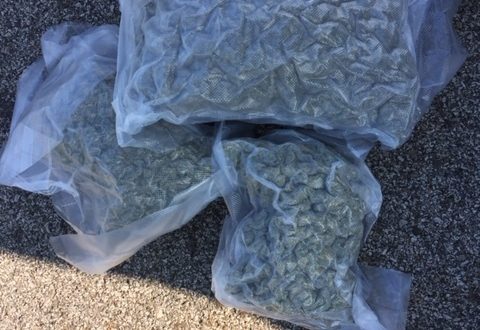 Vigo County—Aug 25, 2017–This morning at 10:00, 44-year-old Brandon L. Thomas of Los Angeles, California, operated his 2017 Kia Soul at 75 miles-per-hour in a 55mph zone, while passing an Indiana State Police trooper on the right. After passing the trooper, Thomas continued to speed and change lanes without signaling.

A traffic stop was initiated and during conversations with Thomas, the trooper noticed several indicators of possible criminal activity. A search of the vehicle yielded approximately two pounds of alleged marijuana inside a backpack. Estimated street value is $6000 (six thousand) dollars. Also found was a fake social security card.

Brandon Thomas was taken into custody and incarcerated in the Vigo County Jail for Dealing Marijuana under 10 pounds and Possession of a Fraudulent Government Document (felonies).

Picture from the scene attached.