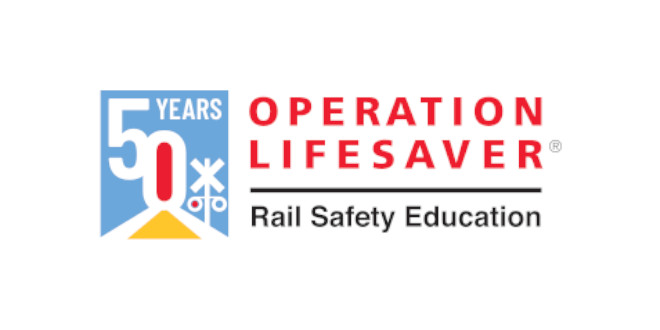 WASHINGTON, DC, April 20, 2022 – Operation Lifesaver, Inc. (OLI), in partnership with the Federal Highway Administration (FHWA), today announced $200,000 in grants to Operation Lifesaver programs in 11 states. The grants will fund a variety of highway-rail grade crossing safety public education projects, many of which will be conducted in conjunction with the nonprofit safety group’s observance of Rail Safety Week, September 19-25, 2022.

Funded by FHWA, the grants will be awarded to Operation Lifesaver organizations in California, Indiana, Minnesota, Missouri, New York, North Carolina, Ohio, Pennsylvania, South Carolina, Tennessee and Texas. These state programs will use the funding to launch public awareness campaigns and host community events that deliver lifesaving rail safety tips to target audiences, including motorists of all ages and professional drivers.

“Operation Lifesaver state programs submitted many creative and outstanding applications for competitive crossing safety public awareness grants this year,” said OLI Executive Director Rachel Maleh. “OLI is grateful for our continuing rail safety partnership with FHWA, and for the grant funding that makes these safety projects possible. Together, we can stop track tragedies,” she stated.

“Keeping people safe is the U.S. Department of Transportation’s number one priority,” said Deputy Federal Highway Administrator Stephanie Pollack. “The Federal Highway Administration is proud to support the work of Operation Lifesaver by providing funding for highway rail crossing safety efforts across the United States. And in the years to come, communities across the country will be able to improve safety where rails and roads meet, thanks to funding provided under the Bipartisan Infrastructure Law.”

The approved grants were awarded through a competitive process, with selection based on criteria such as the defined safety need, the number of highway-rail collisions in the state, and how the proposal leverages federal funds with private partnerships.

Projects funded by the FHWA grants include:

I play on the radio from 7 am -1 pm weekdays on 98.9 FM WYRZ and WYRZ.org. Follow me on twitter @WYRZBrianScott or e-mail me at brian@wyrz.org.
Previous Indiana Honored with Two National Awards for Election Best Practices
Next Reps. Thompson, Steuerwald: State funding gives green light to Hendricks County road improvements