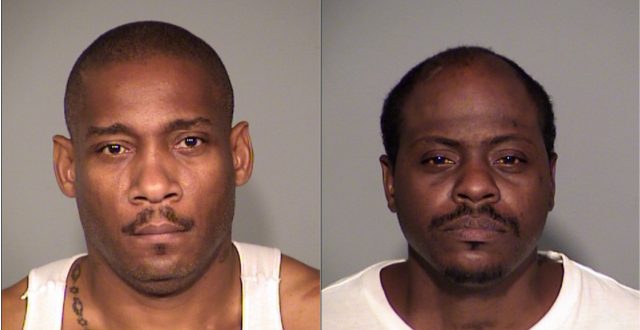 INDIANAPOLIS – Officer with the Indianapolis Metropolitan Police Department were dispatched to the 4200 block of East New York Street (Liquor Barn) reference a possible robbery in progress. When the officers arrived, they found a male subject leaving the store with a box in his hand. The man is seen by officers reaching back just inside the door and dropping the box and then walking out to the officers with hands raised. The subject was identified as 45-year-old Lamarr Coleman of Indianapolis. He was immediately taken into custody.

Officer entered the store to find a second subject, identified as 44-year-old Paul Shipp of Indianapolis assaulting the store clerk. Officer immediately took the suspect into custody. EMS crews were called for the store clerk (victim) identified as 26-year-old Navdeep Singh of Greenwood who sustained a possible broken nose from the vicious attack.

Detectives later found inside the box the first suspect dropped inside the door a large sum of cash and two bottles of liquor. Suspect Lamarr Coleman was arrested on a preliminary charge of robbery and suspect Paul Shipp was arrested on preliminary charges of Robbery, Strangulation, Intimidation, and Battery. The Marion County Prosecutor’s Office will review the case for a charging decision.

I play on the radio from 7 am -1 pm weekdays on 98.9 FM WYRZ and WYRZ.org. Follow me on twitter @WYRZBrianScott or e-mail me at brian@wyrz.org.
Previous Detectives make an arrest in shooting that left one man dead on the city’s east side
Next Quick action by citizens help IMPD officers make apprehension of Robbery suspect