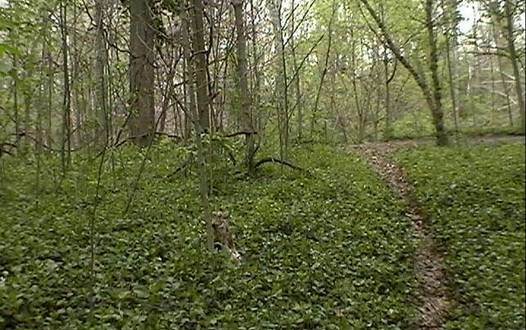 The Indiana Natural Resources Commission on Tuesday adopted tour fees for Wyandotte Caves and dedicated two new nature preserve sites, but the highlight of the meeting was a presentation from third-grade students at The Orchard School.

With parents, teachers and dozens of classmates looking on, several students at the Indianapolis school outlined their petition to add purple wintercreeper to a pending rule that would address a list of terrestrial invasive plants. If approved at a future NRC meeting, the rule would place restrictions that make it illegal to sell, barter, trade, or move the listed plants, including purple wintercreeper.

Students used a PowerPoint, a video and a poster to support their petition, noting that purple wintercreeper can take over a forested area and choke off native plant species.

Purple wintercreeper (Euonymous fortunei) is a non-native evergreen plant that can appear as ground cover or a climbing vine.

The 35.5-acre Peterson site is adjacent to Olin Lake Nature Preserve and protects undeveloped shoreline on Oliver Lake. The Lubbe Woods addition is 34.9 acres and protects examples of old growth forest. Both sites provide habitat for a number of species that are state endangered or of special concern.

In other actions, the NRC:

—Approved tour pricing for Little Wyandotte Cave and Big Wyandotte Cave in Harrison County. Both caves have been closed since 2009 but are scheduled to reopen for tours this summer following the completion of site renovations. The standard fee for a one-hour walking tour will be $4 for children ages 6-11 and $8 for adults (12 and older). Fees increase with longer tours.

—Amended its policy that addresses citizen petitions for administrative rule changes to clarify that a petitioner must provide an explanation or justification for the proposed action, and require at least 24 months between considering petitions for the same rule change.

—Agreed to let expire a rule (312 IAC 6.5) that assists with the registration of off-road vehicles and snowmobiles. The rule will become obsolete on Jan. 1, 2017 when sections of Indiana Code 14-16-1 expire since registration requirements are under the authority of the Indiana Bureau of Motor Vehicles.

The NRC also heard a report from the DNR Division of Fish & Wildlife regarding citizen petitions to extend the pheasant hunting season, allow multiple turkeys to be taken in the spring wild turkey hunting season, and to open the fall firearm season for wild turkey to statewide. The NRC approved the division’s decision to not move forward with these rule change requests, and approved putting additional citizen petitions in the division’s next biennial rule revision process, which will begin in April.

I play on the radio from 7 am -1 pm weekdays on 98.9 FM WYRZ and WYRZ.org. Follow me on twitter @WYRZBrianScott or e-mail me at brian@wyrz.org.
Previous IMPD Officers make apprehension in overnight Burger King Armed Robbery
Next Hendricks County Community Foundation Grants to WYRZ for 20th Anniversary Celebration