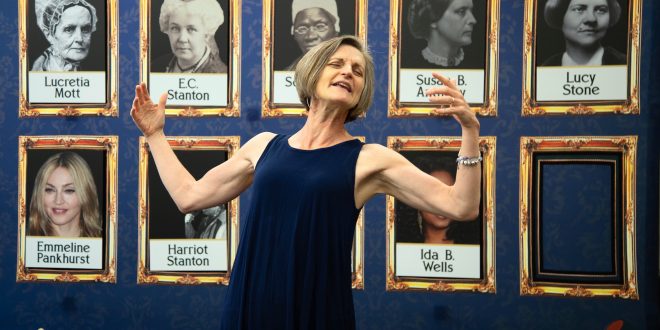 INDIANAPOLIS—What would the fight for women’s suffrage look like in 2019—a centennial after women won the right to vote?

Sally Perkins, a professional storyteller and Director of Butler University’s Speaker’s Lab, imagines Susan B. Anthony would be texting her fellow activists. Ida B. Wells would be tweeting about the importance of the black female voice. Anna Howard Shaw would become Ellen DeGeneres, and the spirit of Sojourner Truth would shine through Queen Latifah. And no matter how hard the fight for voting rights became, none of them would give up.

In Digging in Their Heels, a one-woman storytelling performance that will hit the stage in New York City later this month, Perkins captures the complexities of this part of American history she’s found most people don’t know much about. Through modern references and comedic elements, she makes this 100-year-old story more accessible to audiences who don’t know much about what it took to win the vote.

The show races through 72 years in 60 minutes. But Perkins helps audience members keep track of the 16 characters by assigning each suffragist a modern alter-ego—a well-known woman who mirrors the suffragist’s personality and activism style. The characters use smartphones and social media to communicate, “in some ways pointing to the fact that they didn’t have that technology,” Perkins says. “It was so difficult what they did.”

And the performance doesn’t shy away from those difficulties, which emerged both from those outside the movement and between the women leading it. Instead, Perkins shows where black women experienced racism from their white counterparts, even as they all worked toward a shared goal.

The show first launched at the IndyFringe Festival in 2018. Perkins has performed at several venues since, including a show for Indiana’s League of Women Voters and a few visits to out-of-state conferences. On October 17, she’ll take it to New York for the United Solo Theatre Festival, a 10-week international event dedicated to one-person shows.

When Perkins first applied to perform at the festival, she didn’t really think she had a chance. But she received her acceptance in April, and her October show is now listed as a bestseller among the more than 120 performances on the United Solo calendar. If the first performance sells out completely, Perkins will be able to schedule a second, and that process could repeat for up to eight total shows throughout the course of the festival.

Digging in Their Heels first started taking shape in late 2017, then it unfolded over about 10 months of research and writing. Typically, Perkins is more of an oral performer than a playwright. But to juggle the stories of 16 women over 72 years, sharing the narrative of women’s suffrage demanded a more robust script. And to help keep audience members grounded in the chronology, she called on the skills of Butler CCOM colleague Armando Pellerano, Lecturer of Strategic Communication, to design an interactive set.

“The audience should never have to be thinking, ‘Where are we in the timeline of all this?’” Perkins says. “So I have a huge set with a timeline and a map of the United States, which helps people keep track of which states have granted women the right to vote at different points along the way.”

In Pellerano’s 20 years of experience in the creative services industry, he had never designed a set piece. But on a late-April day when he saw Perkins rehearsing on campus, he stopped to see what she was doing. They chatted about the graphics on her old set, and after a brief critique from Pellerano, Perkins asked if he could help her design something that would tell a better story.

Pellerano chose colors and patterns that captured a Victorian-era mood, making sure the set would complement Perkins instead of drawing attention away from her words.

“I was trying to find something that fit her vision,” he says, “as well as accomplishing what I wanted from a visual standpoint, which was getting people to focus on what she was talking about without being distracted by the background.”

During a recent local performance of Digging in Their Heels, Pellerano had the chance to see the set design in action.

“To me, the coolest thing was seeing her actually use all the pieces,” he says. “There’s a little marker that moves down for the timeline, and we made velcro pieces so she can reveal information more gradually.”

But the show was even more interactive than Pellerano expected, and he was amazed at the way Perkins connected with the audience. Plus, it told an important story he didn’t know.

“What I really learned about was the politics of that time in history,” Pellerano says. “You can read about something, but you’re not really situated in what the conventional wisdom of the time was or what the cultural norms were. To me, it was revelatory that these women were as strategic as they were about when to dig in their heels and when to back off.”

While Perkins has spent the last few months focused on her upcoming trip to New York, she says performance is just one part of her career. At Butler, she teaches public speaking classes and runs the Speakers Lab, a group of tutors who provide students with one-on-one help in creating and delivering speeches or presentations.

In the community, Perkins works with professional clients, helping them effectively tell their stories. She trains organizations on the basics, explaining the power of storytelling when it comes to fundraising, sales, organizational development, recruitment, and more. She also offers individual coaching for a range of story-based projects. This professional service work, along with her commissioned performance experience, strengthens what Perkins does at Butler.

“All my storytelling work has deepened, improved, and impacted the way I teach public speaking,” she says. “Before I started doing all of this, I would never have talked about the importance of storytelling in public speaking class. Now I totally do.”

But it works the other way around, too, and she lets a love of education influence her performing. When audiences walk away from Digging in Their Heels, she wants them to have learned something.

“I want people to feel inspired not to give up, even though, as I say at the end of the story, many of these women went to the grave without ever casting a vote,” Perkins says. “But we need to not give up with whatever our battle is. It matters to me that people walk away feeling inspired by the longevity of the movement, and that they think about how we can be better in the future, no matter what the issue is at hand.”

Digging in Their Heels

I play on the radio from 7 am -1 pm weekdays on 98.9 FM WYRZ and WYRZ.org. Follow me on twitter @WYRZBrianScott or e-mail me at brian@wyrz.org.
Previous Methamphetamine and Paraphernalia Discovered During Traffic Stop
Next Work is underway in Hendricks County on the I-70 and State Road 39 Interchange Modification Project