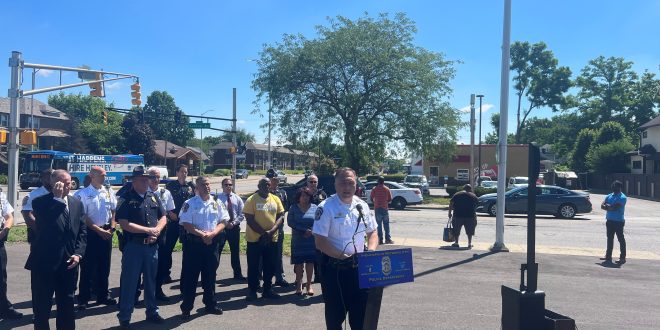 INDIANAPOLIS – Today, Mayor Joe Hogsett, IMPD Chief Randal Taylor and the Indiana State Police announced a new partnership to crack down on reckless driving throughout Indianapolis. This new initiative will allow IMPD officers and ISP troopers to focus on city streets and interstates, where law enforcement officials have seen an increase in street racing and aggressive drivers.

“Over the past year, our city has seen far too many examples of how reckless or negligent driving can turn deadly,” said Mayor Hogsett. “We are taking this issue seriously, enhancing traffic enforcement in residential areas and places where we’ve seen illegal racing. Make no mistake—if you put other people’s lives at risk with dangerous driving, you will pay the consequences.”

“In the past, we have seen local spinning groups take over specific areas or parking lots, charge for admission, and engage in criminal activity. This kind of behavior not only puts those participating in dangers, both other drivers on the road and nearby residents,” said IMPD Commander of Special Operations Bureau Charles Deblaso.

In spring of 2022, IMPD and ISP began to work together to identify individuals who were organizing and hosting “pop-up spinning clubs” in both private and public parking lots and intersections. By coordinating efforts and meeting monthly, IMPD and ISP officials have been able to make significant improvements on city streets and interstates.

Since March of 2022, IMPD and ISP have collaborated to:

“Shutting down roads, parks and other public areas for these dangerous and illegal events is unacceptable and the Indiana State Police will continue to stand alongside our law enforcement partners throughout the state and specifically the Indianapolis Metropolitan Police Department to ensure the reckless activities of these street racing groups are not only halted, but those responsible are held legally accountable,” said ISP Lt. Jeff Hearon.

To combat speeding and reckless driving in the city, IMPD is also investing in tools and technology such as hand-held speed detection equipment, license plate readers and public safety cameras. Additionally, each district continues to utilize proactive and stationary patrols as a way to drive down where traffic accidents and speeding occurs.