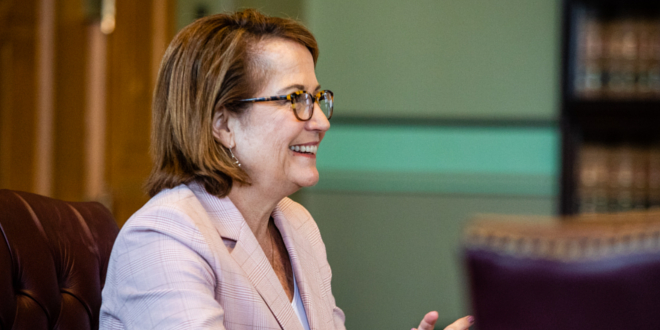 “I’m honored to be appointed as Indiana’s Chief Justice once again. I intend to continue working to put the people of Indiana at the center of everything the courts do to resolve disputes,” explained Chief Justice Loretta Rush. “Our judges, clerks, court staff, and lawyers are committed to a service-oriented approach through numerous programs and initiatives that make the judiciary fair, efficient, and effective.”

Rush was appointed to the high court in 2012 and was first selected as Chief Justice in 2014. During the past five years, she has overseen the development of statewide e-filing, the continued implementation of a state case management system, the certification of over 100 problem-solving courts, the creation of commercial courts, and led the judiciary’s response to the addictions crisis. Her outreach efforts include taking the Court on the road (including back to its first courtroom in the original state capital) and providing extensive training for judges and court staff. Her full biography and photograph are online. The Nominating Commission recruits candidates for appellate-level judicial positions and appoints Indiana’s Chief Justice every five years. Today, the Commission interviewed each justice in a meeting open to the public and press before going into an executive session at approximately 10:40 a.m. for discussion. The Commission (with one member absent) then convened in a public session to vote on its selection of Indiana’s Chief Justice, naming Loretta Rush. Detailed information on the seven-member Commission and the selection process for Indiana’s Chief Justice can be found online.

I play on the radio from 7 am -1 pm weekdays on 98.9 FM WYRZ and WYRZ.org. Follow me on twitter @WYRZBrianScott or e-mail me at brian@wyrz.org.
Previous DOR Commissioner Concludes Statewide Listening Tour
Next I-74 EB & WB lane restrictions to begin Saturday in Shelby County