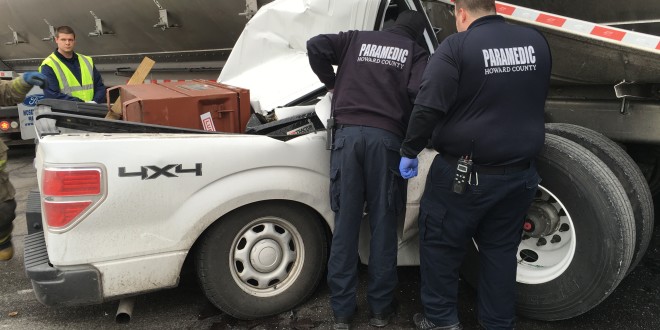 Tipton County – Monday, at approximately 1:55 p.m., officers from the Indiana State Police, the Tipton County Sheriff’s Department, and the Sharpsville Police Department responded to a two vehicle crash on U.S. 31 at Tipton County Road 450 North, in which a Kokomo man was severely injured. 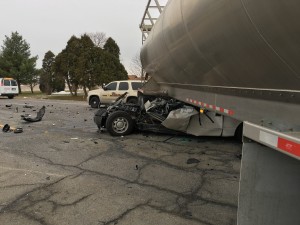 The preliminary crash investigation by Trooper Josh Tarrh revealed that Kenneth Randel, 61, Delphi, IN was driving a 2005 Mack semi-tractor, pulling a bulk trailer, eastbound on Tipton County Road 450 North. Randel failed to yield to cross traffic on U.S. 31 and pulled into the path of a southbound 2011 Ford F-150 pickup truck. The Ford, driven by Curtis Phillips, 34, Kokomo, IN, hit the Mack’s trailer broadside on the driver’s  side. The Ford came to rest under the semi-trailer.

Phillips was flown from the crash scene, by a Lutheran Hospital medical helicopter, to an Indianapolis hospital. He sustained severe internal injuries. Randel was not injured.

Randel was issued a traffic citation for failure to yield to cross traffic. He was hauling hog feed for Co Alliance based in Delphi, IN.

I play on the radio from 7 am -1 pm weekdays on 98.9 FM WYRZ and WYRZ.org. Follow me on twitter @WYRZBrianScott or e-mail me at brian@wyrz.org.
Previous Early Morning Crash in White County Send Two Drivers to the Hospital
Next Indiana energy grants awarded to local businesses and communities