INDIANAPOLIS (August 19, 2016) – Indiana’s seasonally-adjusted unemployment rate dropped 0.2 percent for a second-consecutive month and now stands at 4.6 percent for the month of July. A primary cause for this drop is a third-straight month of significant gains in Hoosiers finding employment (11,276 in July) coupled with a substantial amount of Hoosiers leaving the unemployment ranks (-7,480 in July).  Indiana’s labor force, a measure of Hoosiers employed or seeking employment, has experienced total labor growth of more than 192,000 since January 2013. This has led to all-time highs in the state’s total labor force (3,375,563) and total number of employed (3,220,007).

“Indiana’s labor force has been trending positively throughout the last three years, which demonstrates confidence among Hoosier jobseekers as they secure gainful employment. The corresponding contraction of the applicant pool is also increasing employer demand for workers with the right skills and training,” said Steven J. Braun, Commissioner of the Indiana Department of Workforce Development (DWD). “DWD, along with its WorkOne Career Centers and other community partners, can assist jobseekers in obtaining the skills and training necessary to fill the many high-wage, high-demand jobs available throughout Indiana.”

Commissioner Braun also noted that since 2009, the low point of employment for the state, Indiana’s private sector employment growth has surpassed the nation (13.8 percent vs. 13.0 percent). Total private employment for July stands at 30,000 above the March 2000 peak, and July is the 13th-consecutive month above that peak. Additionally, initial and continued unemployment insurance claims for the first 32 weeks of 2016 are at their lowest point since 1987. 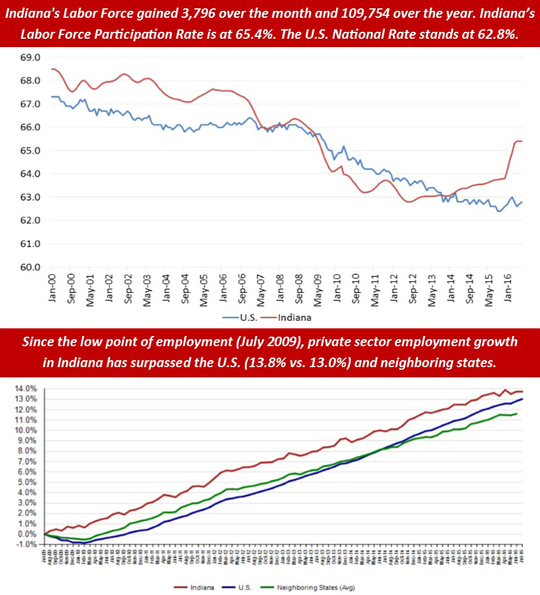 The highest levels of growth occurred in the Professional & Business Services (2,000), Private Education & Health Services (700) and Manufacturing (400) sectors. Gains were partially offset with losses in the Leisure & Hospitality (-2,100), Trade, Transportation & Utilities (1,500) and Construction (-800) sectors. Over the past three years, Indiana’s private sector has grown by 149,000 jobs.

I play on the radio from 7 am -1 pm weekdays on 98.9 FM WYRZ and WYRZ.org. Follow me on twitter @WYRZBrianScott or e-mail me at brian@wyrz.org.
Previous JP Morgan Whistleblower Awarded $95,000
Next Lt. Governor Holcomb Awards $47 Million in Road and Bridge Funds to 102 Central Indiana Communities