Private sector employment gains in January occurred in the Leisure and Hospitality (+4,700), Financial Activities (+1,500) and Construction (+1,200) sectors. Gains were partially offset by contraction in the Professional and Business Services (-3,100), Trade, Transportation and Utilities (-2,300), and Private Education & Health Services (-1,600) sectors. Indiana’s private sector grew by 43,500 jobs in 2016, and has added nearly 141,000 jobs over the past three years.

“Private sector employment in the Hoosier State has grown by nearly 141,000 over the past three years,” said Steven J. Braun, Commissioner of the Indiana Department of Workforce Development. “Additionally, Indiana continues to have an unemployment rate lower than all of our neighboring states.”

Braun also noted that claims for unemployment insurance in 2016 were at their lowest levels since 1998, and the number of unemployed Hoosiers has decreased by 43 percent over the past three years. 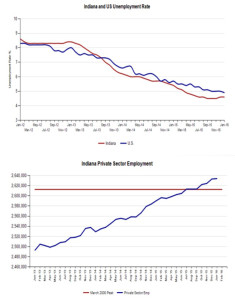 *Indiana’s December 2015 unemployment rate was revised up to 4.6 percent as part of the yearly U.S. Bureau of Labor Statistics benchmarking process.

I play on the radio from 7 am -1 pm weekdays on 98.9 FM WYRZ and WYRZ.org. Follow me on twitter @WYRZBrianScott or e-mail me at brian@wyrz.org.
Previous ISP Trooper’s Kind Words Keep Lady from Jumping off Bridge
Next State of Indiana receives praise from Intel Security for its collaboration with Purdue University