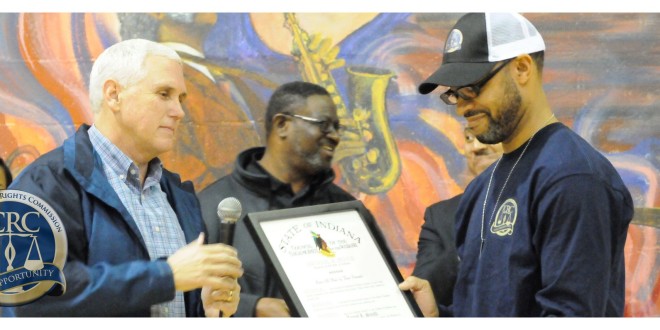 The Sagamore Award is a personal tribute given to those who have provided a distinguished service to the state, and is one of the highest honors presented by the Governor of Indiana. Pence stated, “This is an individual who has led the Civil Rights Commission, under two administrations, with extraordinary distinction.”

The ICRC’s Annual Day of Service is the community service portion of their Annual Dr. Martin Luther King, Jr. Indiana Holiday Celebration, which begins with a Statehouse event the day prior.

This event marks Smith’s final day as the ICRC’s Executive Director, serving in this role since being appointed in June of 2010.

Smith, a former collegiate athlete, has served as a coach and mentor in inner-city Indianapolis for the past 15 years. Beginning January 19, 2016 he will assume the role of Athletic Director of Indianapolis Public Schools through his non-profit 501 c 3, The Lead Change Project.

I play on the radio from 7 am -1 pm weekdays on 98.9 FM WYRZ and WYRZ.org. Follow me on twitter @WYRZBrianScott or e-mail me at brian@wyrz.org.
Previous Supreme Court judicial applications due January 25
Next Grant Supports Breast Health Services at Hendricks Regional Health