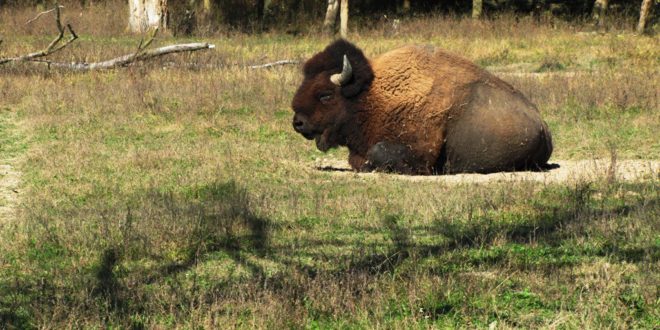 The America bison, recently designated the official mammal of the United States, is connected to Indiana in many ways both past and present.

Best of all, you don’t have to go to Yellowstone National Park to see them. Bison are right at home in an enclosed 25-acre range at Ouabache State Park near Bluffton.

“We have a long history of bison both in Indiana and at this particular state park,” said Dustin Clark, property manager at Ouabache.

Prior to becoming a state park in 1962, the property was managed as the Wells County State Forest & Game Preserve by the Department of Conservation, DNR’s predecessor. It was widely acclaimed as “the greatest wildlife laboratory in the United States” for its raising of pheasants, quail, rabbits, and raccoons, but the site at times also housed black bears, elk, wolves, and bison.

“We have records that date back to 1933 when you could climb the fire tower and look down on the bison herd,” Clark said.

On May 9, President Barack Obama signed the National Bison Legacy Act passed by Congress that declared the American bison as the country’s official mammal.

Bison once numbered in the tens of millions across their native range in America, but habitat loss, disease and unregulated shooting nearly led to their extinction by the late 1800s.

Although never in great numbers, bison historically were part of the Indiana landscape as they migrated between salt licks in Kentucky and the plains of Illinois on a path close to what is U.S. 150 between New Albany and Vincennes.

Several published sources indicate wild bison were gone from Indiana by 1830, but its appearance on the state seal dates to territorial days of 1800.

The fact the American bison survived at all is due in part to the efforts of a Hoosier – William T. Hornaday. Born in Avon in 1854, Hornaday was a taxidermist and zoologist who traveled the world gathering specimens for the U.S. National Museum. It was in that capacity he noticed the decline of the American bison and teamed with Theodore Roosevelt to form the American Bison Society in 1905.

Hornaday reported in 1899 that only about 1,000 bison remained in the West. In 1907, while working at the Bronx Zoo in New York, he oversaw shipment of 15 bison to a wildlife refuge in Oklahoma. It was the first animal reintroduction in the United States.

A year later, the National Bison Range was established as a sanctuary near Missoula, Montana, and the American bison has made a slow but steady recovery to an estimated 500,000 animals on public land and private ranches across the country. There are a handful of bison farms in Indiana.

Hornaday, a prolific writer of 20 books and numerous articles for the Boy Scouts of America handbook and Boys’ Life magazine, was inducted to the Indiana Natural Resources Foundation’s Conservation Hall of Fame in 2010.

Whether or not the bison at Ouabache State Park are direct descendants of Hornaday’s reintroduction efforts is unclear, but the park herd numbers 11 strong today with 10 males and one pregnant female.

“We’ve had upwards of 18 in the past, but 11 seems pretty good,” Clark said. “It gives a fair amount of space for them to roam and still manage to feed themselves. We supply some grain, but mostly as a treat.”

Morgan Napier, a recent Indiana University graduate, is employed as an animal behavior intern at Ouabache this summer. Her duties include work on a feeding pen, observation of bison behavior, and ensuring the park complies with federal regulations.

To watch a video about Ouabache State Park’s bison, go to https://youtu.be/7t9aVOC6KvM.

I play on the radio from 7 am -1 pm weekdays on 98.9 FM WYRZ and WYRZ.org. Follow me on twitter @WYRZBrianScott or e-mail me at brian@wyrz.org.
Previous Coalition for Court Access to work on civil legal aid
Next Donnelly Offers Proposal to Stop Offshoring of Hoosier, American Jobs