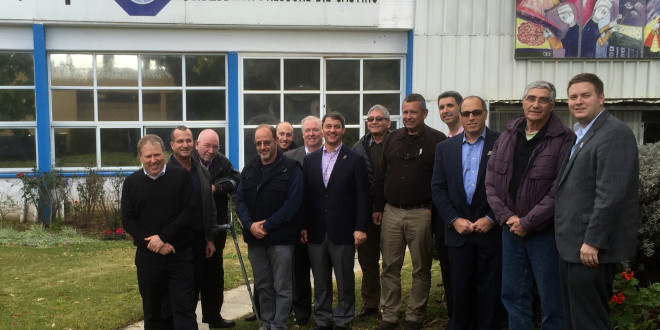 HATZOR, Israel (Jan. 26, 2016) – Indiana Secretary of Commerce Victor Smith joined Omen USA, a manufacturer of aluminum parts for the automotive industry, at the company’s Israeli headquarters today to announce its plans to locate its first North American production facility in Richmond, Indiana, creating up to 100 new jobs by 2019.

“Omen USA had choices when evaluating options for its first North American facility,” said Victor Smith, Indiana Secretary of Commerce. “Indiana has been working diligently with Israeli business and government leaders to build a meaningful relationship, and today’s news is a direct result of our work together. This week we’re continuing to strengthen our relationship with Israel’s top industries, and today that work is bringing Omen USA to Indiana and 100 new Hoosier jobs to Richmond.”

Omen USA, a subsidiary of the Israel-based Omen Casting Group, will initially invest $16 million to renovate and equip a 76,000-square-foot facility in Richmond, with plans to begin operations by the end of the year and invest an additional $7 million into the facility by 2021. The global high pressure die casting company, which directly employs more than 240 associates at facilities in Israel, Portugal and Russia, will manufacture aluminum parts for drivelines, steering components and oil pumps at its new Indiana facility, which will be installed in cars for American and German automotive manufacturers.

“Omen’s decision to invest in a project in Richmond, Indiana was taken to fulfill the commitments to our American clients of localizing Omen’s production, constructing a modernized facility near our customers and offering close support while minimizing supply chain risks,” said Gabi Rezinovsky, vice president of business development for Omen Casting Group. “The support of the state and local authorities are an important factor in deciding on Richmond, Indiana.”

Omen USA’s announcement comes as a delegation of Hoosier economic development and technology leaders attend the Cybertech 2016 conference in Tel Aviv, the second largest cyber security-focused conference in the world. As part of the conference, the Indiana delegation is meeting with government and business leaders to discuss opportunities to strengthen the rising cultural and economic relationship between Indiana and Israel. This includes meetings with chief executives at Israel-based tech companies, as well as meetings with Israeli government officials at the Office of the Chief Scientist and SIBAT, which coordinates Israel’s export of defense-related production and related matters. The delegation also attended a briefing hosted by U.S. Ambassador to Israel Daniel B. Shapiro at the U.S. Embassy in Tel Aviv this week.

The trip follows Governor Pence’s jobs and economic development mission to Israel in December 2014 and his hosting of an Indiana-Israel Business Exchange last April, which brought executives from nine Israeli companies, 24 Hoosier businesses and six Indiana public safety agencies together in Indianapolis to discuss innovation in the security and defense sectors.

The Indiana Economic Development Corporation offered Omen USA up to $400,000 in conditional tax credits and up to $150,000 in training grants based on the company’s job creation plans. These incentives are performance-based, meaning until Hoosiers are hired, the company is not eligible to claim incentives. Wayne County and the city of Richmond will consider additional incentives at the request of the Economic Development Corporation of Wayne County.

“I’m thrilled Omen USA chose Richmond for their first North American facility,” said Richmond Mayor Dave Snow. “This project demonstrates that Richmond is a great choice for companies looking to locate either in the Midwest or to establish their first North American presence. This is excellent progress and with more work this will only be the beginning of more investors who realize the potential of Richmond and Wayne County.”

I play on the radio from 7 am -1 pm weekdays on 98.9 FM WYRZ and WYRZ.org. Follow me on twitter @WYRZBrianScott or e-mail me at brian@wyrz.org.
Previous Coats Statement on Indiana’s December Employment Numbers
Next Public Sharps Disposal Program Opens at Health Department