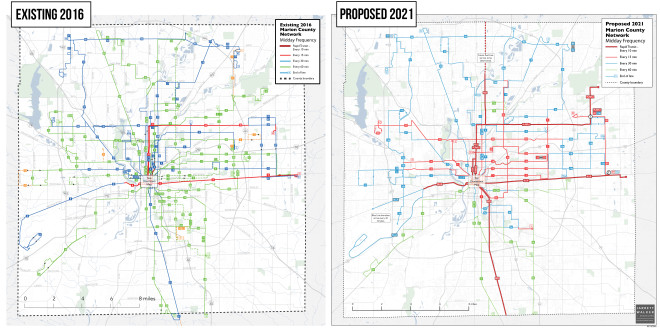 Legislation passed by the State General Assembly in 2014 authorized a new funding mechanism for transit by calling a voter referendum. The MCTP offers a comprehensive investment strategy for the revenue that would be raised within Marion County if a 0.25 percent income tax is passed through a referendum. The MCTP is a transit investment plan that begins to adequately meet the needs of current and potential future riders. It will increase job access opportunity, provide reliable means to reach health care services, connect neighborhoods, and continue to spark economic investment.

This March, the City County Council introduced the proposed income tax increase to fund the MCTP and it was given to the Metropolitan and Economic Development, Municipal Corporations, and Rules and Public Policy Committees for consideration. If a Marion County referendum is authorized and is successful on the November 2016 ballot, City County Council must enact the tax to finalize the process.

“Transit in Indy has historically been under funded. There is a need for investment to meet our transit needs and we have created a plan which will spur continued economic growth and opportunities. Quality transit helps us maintain regional competiveness,” stated IndyGo Board of Director Chair Danny Crenshaw. By 2021, the MCTP would bring high-frequency service to nearly 250,000 residents and jobs, run seven days a week on all routes, and offer a 71 percent increase in total service availability. Phase 1 of the Red Line is moving forward after receiving 75 percent of project cost funding through a Federal Small Starts grant and is independent of the referendum.

After staff received nearly 100 public comments in a 5 week period, modifications were made to the Marion County Transit Plan. “IndyGo staff reviewed comments, responded, directed resources into areas of concern before sharing the Plan with the Board,” stated IndyGo President and CEO Mike Terry. Since 2009, various studies and sustained public involvement under the banner Indy Connect have helped sculpt a detailed plan for regional mass transit with the support of the Metropolitan Planning Organization (MPO) and Central Indiana Regional Transportation Authority (CIRTA). The MCTP begins the process of implementing Indy Connect.

If the referendum is on the ballot, IndyGo would continue to engage in public involvement, and would refine plan details including route scheduling, public hearings, and minor revisions that respond to the public but adhere to the spirit of the plan as presented.

I play on the radio from 7 am -1 pm weekdays on 98.9 FM WYRZ and WYRZ.org. Follow me on twitter @WYRZBrianScott or e-mail me at brian@wyrz.org.
Previous Brownsburg Stormwater Department Holds Rain Barrel Decorating Contest
Next Op-Ed: In the Indiana legislature, it’s always next year for women’s real issues