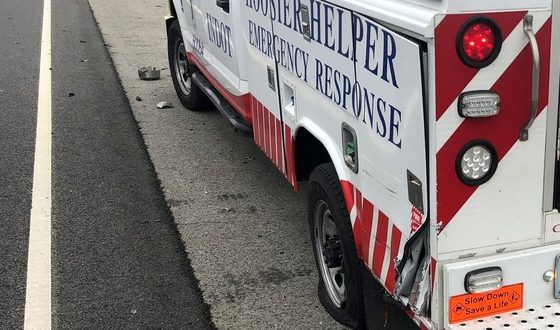 Indianapolis, IN – An Indianapolis woman was arrested after she sideswiped an INDOT Hoosier Helper truck while allegedly driving under the influence of narcotics. The crash happened yesterday afternoon, December 28, at 3:15 p.m. on I-69 southbound at the 201.9 mile marker, near 82nd Street. The Hoosier Helper had stopped to assist a stranded vehicle and his truck was parked on the shoulder with emergency lights activated. A red Chevrolet Cruze ran off the roadway and sideswiped the driver’s side of the Hoosier Helper truck. Neither the Hoosier Helper, the stranded motorist, nor the driver of the Chevrolet were injured in the crash.

Preliminary investigation at the scene led Troopers to believe the driver of the Chevrolet, 66 year old Sandra Conor of Indianapolis, was impaired. Further investigation and tests led to probable cause for an arrest. Conor was transported to the Marion County Jail.

The charges mentioned in this release are preliminary, actual charges will be determined by the Marion County Prosecutor’s Office upon review of the case.

I play on the radio from 7 am -1 pm weekdays on 98.9 FM WYRZ and WYRZ.org. Follow me on twitter @WYRZBrianScott or e-mail me at brian@wyrz.org.
Previous Kroger Health to Provide COVID-19 Vaccine Nationwide
Next Be Well Crisis Helpline answers the call for Hoosiers in need