INDIANAPOLIS (July 22, 2016) – Indiana’s seasonally-adjusted unemployment rate dropped 0.2 percent from the previous month to 4.8 percent for the month of June. The unemployment rate is a U.S. Bureau of Labor Statistics (BLS) indicator that reflects the number of unemployed people as a percentage of the labor force. For the second consecutive month the number of Hoosiers who found employment increased (8,594), while the number of unemployed Hoosiers decreased (- 5,118).  The result was an overall labor force growth of 3,476 in June. Indiana’s labor force, a measure of Hoosiers employed or seeking employment, continues its positive momentum and brings the total labor force growth to more than 190,000 since January 2013.

Indiana’s seasonally-adjusted labor force is now at 3,373,371 and the number of employed is at 3,210,299 – both of which represent all-time highs for Indiana. The low unemployment rate combined with the record labor force brings Indiana’s Employment to Population Ratio to 62.3 percent. This ratio, which compares the proportion of the labor force currently employed to the total working-age population, is the highest recorded since July 2008 and nearly 3 percent higher than the current U.S. ratio of 59.6 percent.

“Indiana’s labor force and private sector employment grew while unemployment dropped, which are affirmative signs that many Hoosiers are actively seeking and securing gainful employment,” said Steven J. Braun, Commissioner of the Indiana Department of Workforce Development (DWD). “While the most recent employment report is positive, there are still segments of the population that are out of the labor force and it is incumbent upon DWD and our partners to actively reengage and assist them in integrating back into the workforce.”

Commissioner Braun also noted that since 2009, the low point of employment for the state, Indiana’s private sector employment growth has surpassed the nation (13.7 percent vs. 12.8 percent). Total private employment for June stands at 28,400 above the March 2000 peak, and is the 12th-consecutive month that peak. Additionally, initial unemployment insurance claims for the first 28 weeks of 2016 are at their lowest point since 1987. 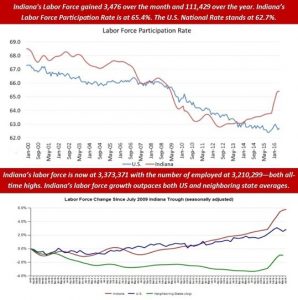 The highest levels of growth occurred in the Leisure and Hospitality (2,600), Construction (2,600), Private Education & Health Services (2,300) and Trade, Transportation and Utilities (1,500) sectors. Gains were partially offset with losses in Professional & Business Services (-2,300) and Manufacturing (-1,300) sectors. Over the past three years, Indiana’s private sector has grown by 148,000 jobs.

I play on the radio from 7 am -1 pm weekdays on 98.9 FM WYRZ and WYRZ.org. Follow me on twitter @WYRZBrianScott or e-mail me at brian@wyrz.org.
Previous Donnelly Provisions to Combat Opioid Abuse Signed Into Law
Next Former Ovation CFO receives suspended sentence for securities fraud