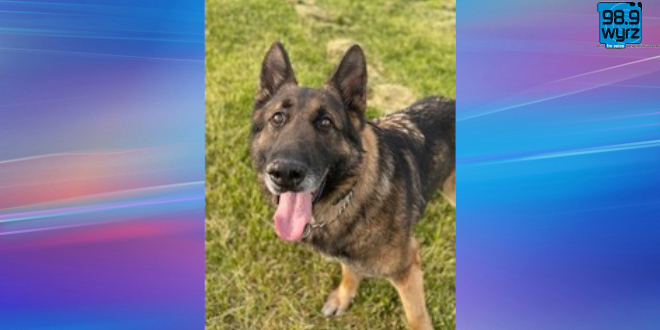 Indianapolis, IN – The Indiana State Police is saddened to announce the passing of K9 Votto. Votto was a 10 1/2 year old German Shephard who has patrolled with Trooper Adam Buchta for more than eight years. Votto came to ISP from Poland and after completing his training he was originally partnered with another trooper, however a promotion for that trooper caused Votto to be reassigned to Master Trooper Buchta.

Votto was specifically trained in narcotics detection, he and his partner spent most days patrolling central Indiana Highways intercepting loads of narcotics. During his career Votto is responsible for the recovery of:

The Indiana State Police K9 program has a steep tradition stretching back to 1938 when with the first dog, a bloodhound named Brutus, began patrolling statewide.

Indiana State Police Indianapolis District Commander, Lieutenant Josh Watson said, “Votto was a valuable asset to the Indiana State Police and to the citizens of Indiana. His efforts and desire to detect illegal narcotics undoubtedly saved lives. Votto will be missed.”  March 23, 2022 Votto was humanely euthanized after battling an illness for the past six months.

I play on the radio from 7 am -1 pm weekdays on 98.9 FM WYRZ and WYRZ.org. Follow me on twitter @WYRZBrianScott or e-mail me at brian@wyrz.org.
Previous Kroger Participates in “Test to Treat” COVID-19 Program
Next Sights N Sounds with Allen Kiger