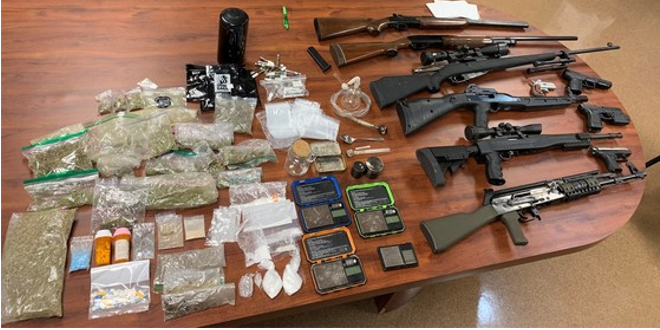 Nashville (Brown County) – After an investigation found probable cause, a Brown County Search Warrant was issued yesterday afternoon regarding alleged methamphetamine dealing for a residence on Plum Creek Road in Nashville.

The search warrant for the residence also included Christopher James, 35 of Nashville allegedly dealing large amounts of meth from that location.

Troopers and Detectives from the Indiana State Police, along with Deputies from the Brown County Sheriff Department, executed the search warrant.

James was found inside.

Inside the residence, Troopers located over 100 grams of a crystal substance that field tested positive for methamphetamine. ecstasy, psilocybin mushrooms, marijuana, pills, dimethyltryptamine, six long guns, four hand guns, (one with an obliterated serial number and one which was found to be stolen out of Lanesville, Indiana).

Christopher James was transported to the Brown County Jail where he was incarcerated on the following charges;

Brown County Prosecutor Ted Adams was at the scene and assisted in the investigation as well.

Anyone with information regarding illegal drug activity is encouraged to contact the Indiana State Police Bloomington District at 812-332-4411.

I play on the radio from 7 am -1 pm weekdays on 98.9 FM WYRZ and WYRZ.org. Follow me on twitter @WYRZBrianScott or e-mail me at brian@wyrz.org.
Previous Hendricks County Community Foundation Scholarships Open on August 1
Next Big Top Circus Returns to the 2019 Indiana State Fair