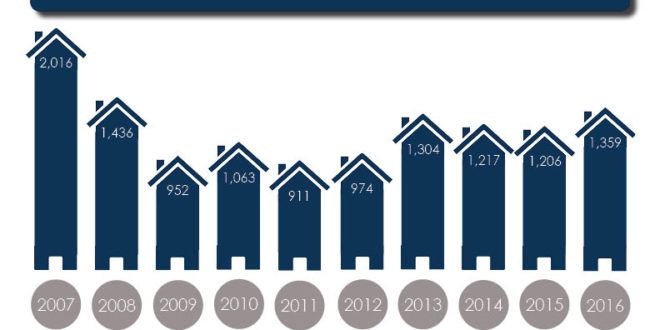 INDIANAPOLIS, Ind. – Single-family building permits in Indiana increased 11 percent in April over the previous month according to the latest data from the U.S. Census Bureau and the Department of Housing and Urban Development. Permits increased 13 percent in April compared to the same time last year.
In April 2016, there were 1,359 single-family building permits issued compared to 1,206 in 2015. The single family permit numbers for the first four months of 2016 are up 15 percent compared to the first four months of 2015.
“The steady increase in single-family building permits as well as new-home sales indicate that the housing market is gaining strength as we head into the summer months,” said Indiana Builders Association Chief Executive Officer Rick Wajda.  “Indiana kicks-off Homeownership Month on June 1, and our members look forward continuing to help make the dream of homeownership a reality for many Hoosiers by providing safe and affordable housing,” said Wajda.
The National Association of Home Builders/Wells Fargo Housing Market Index remained at 58 in May. Any number over 50 indicates that more builders view conditions as good than poor. 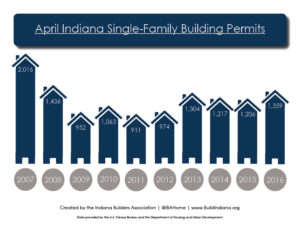 I play on the radio from 7 am -1 pm weekdays on 98.9 FM WYRZ and WYRZ.org. Follow me on twitter @WYRZBrianScott or e-mail me at brian@wyrz.org.
Previous ISDA accepting applications for Organic Certification Cost Share program
Next Indiana Schools, Communities Rally to Keep Students on Track for Scholarships