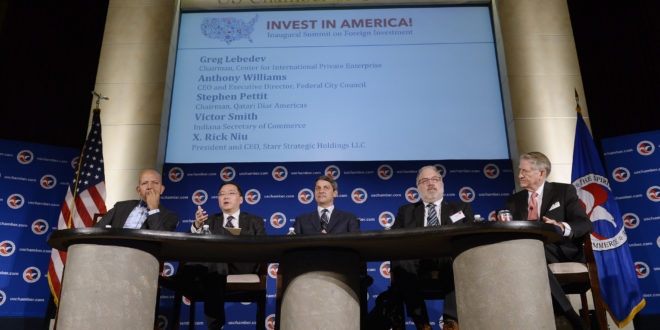 WASHINGTON (April 18, 2016) – Indiana Secretary of Commerce Victor Smith was invited to Washington, D.C. last week to address U.S. and international leaders on the establishment of and recent success of Indiana Regional Cities Initiative.

“The Regional Cities Initiative is a unique solution to a common problem,” said Smith. “Like many Midwestern states, the biggest threat to Indiana’s continued economic growth is population stagnation. Thanks to Governor Pence’s initiative, we have witnessed an unprecedented level of collaboration and planning across the state, and 70 percent of Indiana’s population now lives in a region with a bold and practical vision for transforming itself into a nationally recognized places to live, work and play. The Regional Cities Initiative is the key to Indiana’s economic future and to attracting top talent to the Hoosier state for generations to come.”

As part of the Indiana Regional Cities Initiative’s first phase, the state selected three regions – North Central, Northeast and Southwest Indiana – to receive $42 million each in state matching funds to advance their regional development plans. Together, these plans outline 100 quality of place projects totaling more than $2 billion in combined public and private investment, with a 15:1 state investment leverage ratio. More than half of these projects are scheduled to be complete within the first three years.

I play on the radio from 7 am -1 pm weekdays on 98.9 FM WYRZ and WYRZ.org. Follow me on twitter @WYRZBrianScott or e-mail me at brian@wyrz.org.
Previous Coats Op-ed: America Needs Tax Reform
Next Indiana Bicentennial Commission Endorses Three Hendricks County Projects