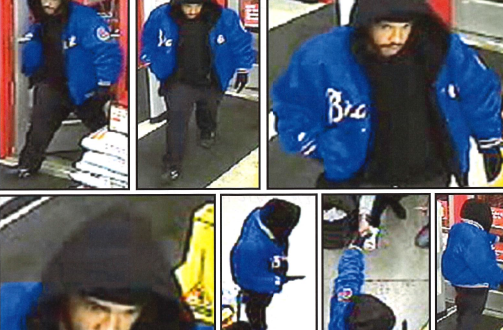 INDIANAPOLIS – Indianapolis Metropolitan Police Department (IMPD) Robbery detectives are seeking the public’s assistance in locating a person of interest in a string of robberies of auto parts store on the city’s southwest side.

The person of interest is believed to be involved in seven armed robberies of auto parts stores that occurred between 11/29/2017 to 12/20/2017. He is described as a light skinned black male, in his 30’s, 5’5” to 5’8”, 180lbs, with a mustache and beard. He has tattoos on his hands and a tear drop tattoo on his face. See the attached flyer for pictures of the person of interest.

If seen, do not approach, call 911 immediately. If you have information on this person’s whereabouts, contact the IMPD Robbery Office at 317.327.2375 or call Crime Stoppers of Central Indiana at 317.262.8477 or (TIPS).  Citizens can also download the mobile P3tips app for Apple or Android phones to submit a mobile tip, or go to www.CrimeTips.org to submit a web tip. You will remain anonymous and may be eligible for a cash reward of up to $1000 if the information leads to a felony arrest.  Only tips submitted directly and anonymously to Crime Stoppers are eligible for these cash rewards. Information given via Crime Stoppers should be considered anonymous. 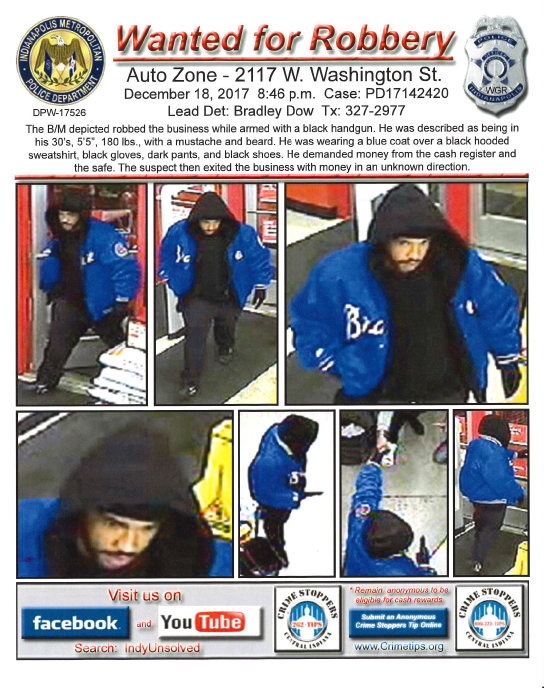 I play on the radio from 7 am -1 pm weekdays on 98.9 FM WYRZ and WYRZ.org. Follow me on twitter @WYRZBrianScott or e-mail me at brian@wyrz.org.
Previous Indianapolis Man Arrested for Intimidation
Next Town of Brownsburg Holiday Closing Schedule