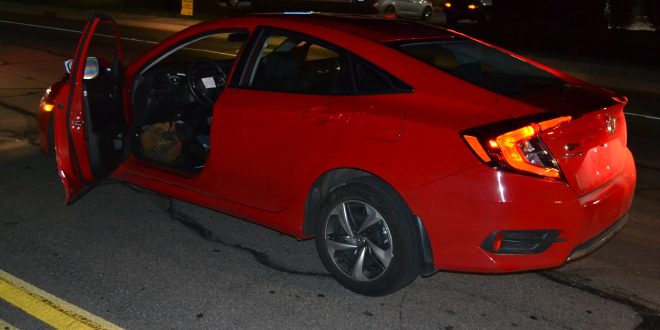 On Monday September 26th, 2022, just after 5:00 PM, a red Honda Civic was carjacked from the 3800 block 0f N. Mitthoefer Rd. (IP220096002). Later, that night, just before 11:00 PM, the red Honda Civic was used in the commission of a robbery at 3749 E Washington Street. The suspects in this robbery are believed to be the same suspects in the carjacking.  Detectives were able to identify a possible location of the carjacked vehicle in the Amber Woods apartment complex.

On Tuesday September 27, 2022, Robbery detectives with the assistance of the Federal Bureau of Investigations (FBI), Violent Crime Task Force (VCTF) and IMPD Special Weapons and Tactics (SWAT) team were conducting a follow-up investigation on the red Honda Civic. During this investigation, detectives were able to locate the carjacked vehicle. As officers attempted a traffic stop on the vehicle, the suspect driving the vehicle led officers on a brief pursuit.
IMPD SWAT officer apprehended both juveniles without further incident.

All suspects involved were placed under arrest preliminarily for robbery.

Hunt and the two juveniles are also currently being investigated for the crimes listed below.

The Marion County Prosecutor’s Office will make the final charging decision. These investigations are still ongoing.

Anyone with information about this incident should contact the IMPD Robbery Office at 317.327.3475.

Alternatively, they can call Crime Stoppers of Central Indiana at 317.262.8477 or (TIPS). Citizens can also download the mobile P3tips app for Apple or Android phones to submit a mobile tip, or go to www.CrimeTips.org to submit a web tip. You will remain anonymous and may be eligible for a cash reward of up to $1000 if the information leads to a felony arrest. Only tips submitted directly and anonymously to Crime Stoppers are eligible for these cash rewards.

A charge of a crime is merely an accusation, and the defendants are presumed innocent until and unless proven guilty.

I play on the radio from 7 am -1 pm weekdays on 98.9 FM WYRZ and WYRZ.org. Follow me on twitter @WYRZBrianScott or e-mail me at brian@wyrz.org.
Previous Troopers Investigating Shooting on I-70 near Keystone Avenue
Next 2022 General Election Voter Registration Ends Today