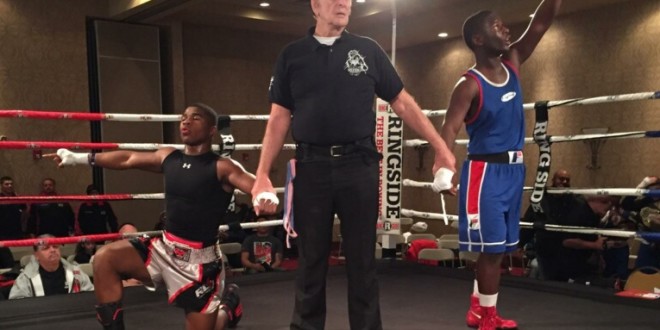 Romello secured his appearance in the championship round by earning both local and regional wins. Due to an inadvertent mix-up in Romello’s paperwork, he was forced to compete in a higher weight class of the regional tournament which forced him to compete in the national competition in that same weight class.  After three grueling two-minute rounds, Romello lost in a close decision to the #1 ranked boxer in the country.  Silver Gloves National Tournament is a national competition with competitors from all over the country competing in several weight divisions.

Under the guidance, coaching and mentorship provided by his coach IMPD Officer Marcus Chapman Romello had been training for months.  For several years, Officer Chapman, currently assigned to Community Affairs Branch, has guided and mentored hundreds of Indianapolis area student athletes.  Several of those athletes have participated in the Golden Gloves, Silver Gloves, Junior Olympics, National PAL and Olympic Qualifier tournaments, and some have become champions.

The Indianapolis Metropolitan Police Department Indy PAL/Christamore House Boxing Program is a collaboration between the Christamore House and the Indianapolis Metropolitan Police Department. For the last 13 years, the program has engaged youth in the metro area in the skills and discipline needed to become productive members of our community. Working with police has enabled students to have a better understanding of police and community, build self-esteem, and the partnership has produced civic leaders. The program is proud to have graduated a vast majority of student-athletes and has 13 boxing champions to its credit.

Anyone interested in helping with the Indy PAL/Christamore House Boxing Program, please call the Community Affairs Branch at (317) 327-3187.

I play on the radio from 7 am -1 pm weekdays on 98.9 FM WYRZ and WYRZ.org. Follow me on twitter @WYRZBrianScott or e-mail me at brian@wyrz.org.
Previous Indiana State Police Participating in the ICJI March Enforcement Campaign
Next Pedestrian Critically Injured in Hit and Run Accident on Indianapolis West Side