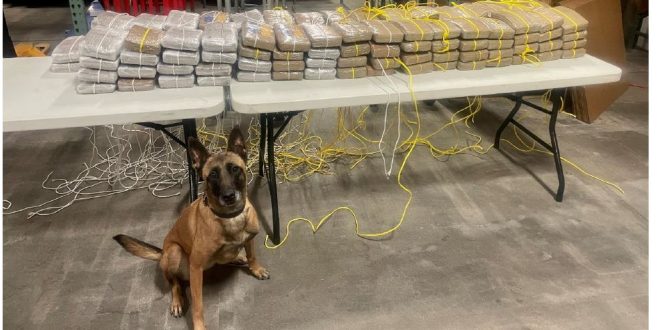 During the investigation, IMPD Interdiction Detectives used an IMPD narcotics K-9 (Mina) who made a positive indication of narcotics odor on the semi-tractor and trailer in question. Officers contacted the driver, later identified as 50-year-old Mauro Alonzo-Vargas of Ennis, Texas. Interdiction detectives continued the investigation, and a search warrant was granted for the semi-tractor and trailer.

With the assistance of IMPD Safe Streets and the Northwest Violence Reduction Team, IMPD Criminal Interdiction Detectives located approximately 130 kilos of suspected cocaine, with an estimated street value of 13 million dollars. The operator of the semi-tractor trailer, Alonzo-Vargas, was arrested and sent to the Hendricks County Jail.

The Hendricks County Prosecutor’s Office will review the case and make a final charging decision.

“This investigation indicates the great work of our Interdiction Detectives and the partnerships they have formed with other agencies to locate and remove illegal narcotics off the streets. IMPD continues to dedicate resources to combat crime with technology and the support of our community.” said IMPD Chief Randal Taylor.

Anyone with further information about this incident should call Crime Stoppers of Central Indiana at 317.262.8477 or (TIPS).  Citizens can also download the mobile P3tips app for Apple or Android phones to submit a mobile tip or go to www.CrimeTips.org to submit a web tip. You will remain anonymous and may be eligible for a cash reward of up to $1000 if the information leads to a felony arrest.  Only tips submitted directly and anonymously to Crime Stoppers are eligible for these cash rewards.

I play on the radio from 7 am -1 pm weekdays on 98.9 FM WYRZ and WYRZ.org. Follow me on twitter @WYRZBrianScott or e-mail me at brian@wyrz.org.
Previous Applications available for law school assistance program
Next Visit Hendricks County Selling 2023 Wall Calendars