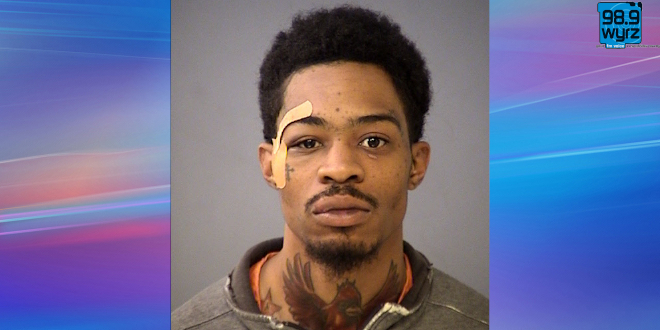 INDIANAPOLIS – During January and February, the Indianapolis Metropolitan Police Departments (IMPD) Covert Robbery Unit investigated a series of robberies on Indianapolis’ west side. On Friday, February 5, 2021, robbery detectives developed probable cause and arrested 26-year-old Alfred Cunningham for his alleged involvement in the string of robberies.

On Thursday, February 4, 2021, at approximately 8:26 p.m., IMPD Southwest District officers were dispatched to an armed robbery of a business in the 5500 block of W. Washington Street. Upon arrival, officers confirmed an armed robbery and broadcast the suspect’s clothing description to other officers in the area.

Officers actively canvassing the area searching for the suspect encountered a male matching the physical and clothing description. Officers attempted to detain the suspect, later identified as Cunningham. However, he resisted, and during the struggle, officers located a handgun in Cunningham’s possession. Officers were able to secure Cunningham and place him into handcuffs. Cunningham was found to be on supervised release for a prior, unrelated robbery conviction

Covert Robbery Detectives responded to the scene and apprehension site. A search warrant was sought and granted for the suspect’s vehicle and clothing. Cunningham was transported to the robbery office and confessed to the Dollar Store robbery and additional armed business robberies.

Below is a list of robberies Cunningham is believed to be connected to:

Anyone with any further information about these incidents should call the IMPD Homicide /Robbery Office at 317.327.3475 or Crime Stoppers of Central Indiana at 317.262.8477 or (TIPS).  Citizens can also download the mobile P3tips app for Apple or Android phones to submit a mobile tip, or go to www.CrimeTips.org to submit a web tip. You will remain anonymous and may be eligible for a cash reward of up to $1000 if the information leads to a felony arrest.  Only tips submitted directly and anonymously to Crime Stoppers are eligible for these cash rewards.

I play on the radio from 7 am -1 pm weekdays on 98.9 FM WYRZ and WYRZ.org. Follow me on twitter @WYRZBrianScott or e-mail me at brian@wyrz.org.
Previous Behning: Accelerating economic recovery by supporting small businesses
Next Gov. Holcomb Now Accepting Applications for Fellowship Program