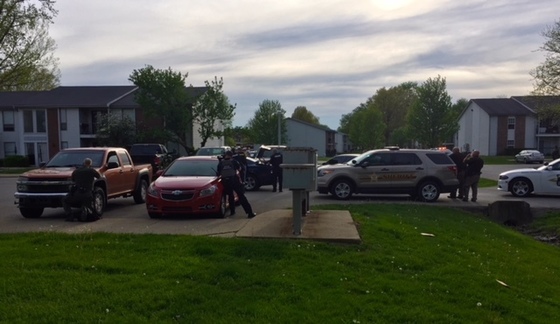 Vigo County—Indiana State Police Detectives and Crime Scene Investigators are currently investigating the death of a veteran Terre Haute Police Officer and a homicide suspect during an exchange of gunfire at an apartment building on Linwood Street in the Garden Quarter Apartment Complex, south side of Terre Haute, at approximately 6:32 last evening.

Preliminary investigation revealed the Terre Haute Police Department was investigating an early Friday afternoon homicide on south 18th Street in the city. As their investigation progressed, information led four of their officers to a potential suspect in the Garden Quarter Apartment. As the officers encountered the male suspect near the front door of the two-story building, the suspect fired upon the officers from an elevated position on the second floor. Terre Haute Police Officers exchanged gunfire with the suspect. The veteran officer, later identified as Patrolman Rob Pitts, was rushed to Terre Haute Regional Hospital where he succumbed to his wounds.

A standoff ensued, and ultimately ended at approximately 9:15 last evening, as members of the Terre Haute Police Department SWAT team entered the apartment building and located the suspect on the second floor hallway. The suspect succumbed to his wounds as well.

Vigo County Coroner Dr. Susan Amos has released the preliminary results as; cause of death was single gunshot wound to the head and the manner of death as homicide.

The investigation is ongoing and further information will be released as it becomes available. Autopsies are expected tomorrow.

I play on the radio from 7 am -1 pm weekdays on 98.9 FM WYRZ and WYRZ.org. Follow me on twitter @WYRZBrianScott or e-mail me at brian@wyrz.org.
Previous Donnelly, Young, Indiana Delegation Urge President Trump to Grant Disaster Declaration for Indiana Following Severe Storms and Flooding
Next Visit Indiana Week kicks off with FREE admission to State Parks