Greenfield, IN –Investigators from the Indiana State Police, in conjunction with the Hancock County Sheriff’s Department and the Internet Crimes Against Children Task Force, arrested a Greenfield man on the preliminary charge of Child Solicitation. 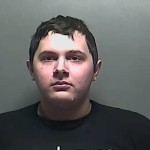 An investigation that began in Oregon in November, 2015 led police to 22 year old Nicholas Trautmann of Greenfield. According to investigators, Trautmann was corresponding with a juvenile from Oregon via social media websites and text messages. During the correspondence, Trautmann solicited pornographic photos of the juvenile victim.  During a search warrant served earlier today at Trautmann’s residence, his computer and his cellular phone were ceased for further examination.

Trautmann has been booked into the Hancock County Jail on the preliminary charge of Child Solicitation, a level 5 Felony. He is being held without a bond until his initial hearing, which has not yet been set.

I play on the radio from 7 am -1 pm weekdays on 98.9 FM WYRZ and WYRZ.org. Follow me on twitter @WYRZBrianScott or e-mail me at brian@wyrz.org.
Previous Indiana Tax Season Opens
Next IMPD homicide detectives are investigating a shooting that has killed one man and injured another