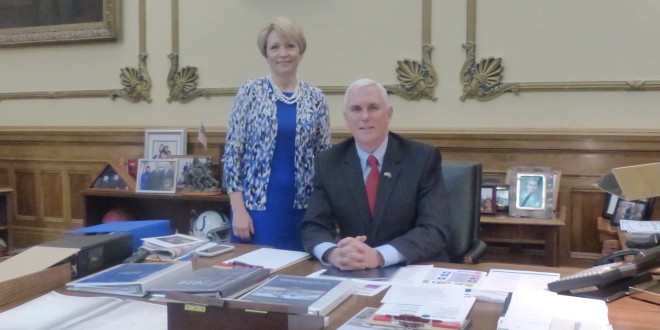 Indianapolis – Governor Mike Pence today issued the following statement regarding Lieutenant Governor Sue Ellspermann’s service to the state of Indiana, on her final day in office.

“Every Hoosier should be grateful for the service and example of Lt. Governor Sue Ellspermann. Her distinguished service and unmatched enthusiasm for our state set a standard for public service that has inspired people across Indiana. I have no doubt that her service to Indiana will extend far beyond that of her tenure in our administration, but I will miss the opportunity to work with this dynamic and remarkable leader.

“It has been a privilege and a joy to serve the people of Indiana with Lt. Governor Sue Ellspermann, and on behalf of all the people of Indiana, I thank her for her service and wish her, Jim, and their entire family every success and every blessing in the years ahead.”

During her first year in office, Lieutenant Governor Ellspermann completed a 92-county Listen and Learn Tour to hear from Hoosiers across the state.

In June 2013, Governor Pence and Lt. Governor Ellspermann established the Office of Small Business and Entrepreneurship to align efforts in supporting small businesses and entrepreneurs. The office has since reported millions of dollars in investments in small businesses and hundreds of new business starts and fulltime jobs created.  The Office of Defense Development was also created to coordinate communication and support between the State and the ten U.S. military facilities in Indiana.

Lt. Governor Ellspermann has supported Shovel Ready Indiana, an effort led by the Office of Community and Rural Affairs in partnership with the state’s Fast Access Site Team to expedite the business location process by making sites more attractive to companies and site-selection consultants looking to locate or expand their business.

Lt. Governor Ellspermann continued to build upon the success of the Indiana Main Street and Stellar Communities programs, which encourage economic development, redevelopment and improvement to the downtown areas of Indiana’s rural and smaller cities and towns. Under the program, more than 100 Indiana Main Street communities are working to focus restoration and revitalization efforts within their communities.

In 2013, Ellspermann led a delegation of agricultural business leaders and commodity representatives on her first international trade mission to Asia, with stops in Japan, South Korea and Taiwan. In June 2015, Ellspermann led a delegation of 18 representatives from Indiana agri-businesses and State agriculture and rural affairs agencies on a twelve-day agricultural trade mission to China on the heels of Governor Pence’s jobs and economic development mission to China in May.

In a move to continue to promote Hoosier agriculture within the state, last year Lt. Governor Ellspermann launched the Indiana Grown Commission to connect businesses that use or sell agricultural products with Indiana producers.

I play on the radio from 7 am -1 pm weekdays on 98.9 FM WYRZ and WYRZ.org. Follow me on twitter @WYRZBrianScott or e-mail me at brian@wyrz.org.
Previous Donnelly Calls for Passage of Bipartisan Bill to Address Opioid and Heroin Epidemics, says ‘CARA would be significant step forward’
Next Governor Pence Meets with Executives from United Technologies, Carrier