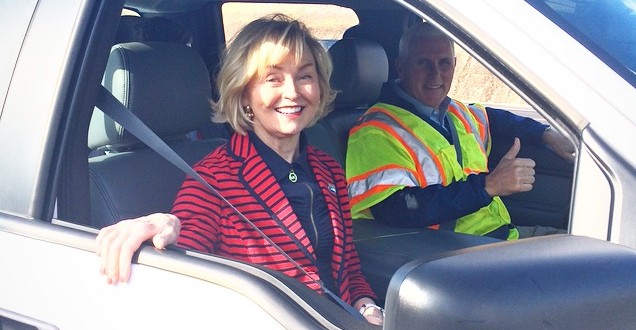 “Hoosiers know that roads mean jobs, and this new interstate section is a key component to the economic vitality and development of southwest Indiana,” said Governor Pence. “Finishing what we’ve started with I-69 will connect an entire region of our state with improved access to jobs, education and healthcare.”

Purdue University researchers tracked State Road 45 travel times within the past month and predict that the new I-69 section opening today will save commuters, on average, 18 minutes of travel-time. Purdue performed a similar study before the first I-69 sections opened in 2012 and estimated a 38-minute travel-time savings between Evansville and Crane.

“Projects like I-69 illustrate the Indiana Department of Transportation’s strong commitment to modernizing Indiana’s transportation infrastructure,” Indiana Department of Transportation Commissioner Brandye Hendrickson said. “The more than $1 billion invested in Indiana’s roads over the last two years combined with Governor Pence’s 21st Century Crossroads plan have Indiana positioned to remain the Crossroads of America for generations.”

The new I-69 section has three new exits at State Road 45, State Road 445 and State Road 37. Teardrop-shaped roundabouts are used to control State Road 445 traffic at the I-69 Exit 104 ramps near the Greene-Monroe county line.

“Our infrastructure is one of the many reasons Indiana is recognized as a great place to do business,” said Becky Skillman, former Lieutenant Governor and president and CEO of Radius Indiana. “This new-terrain interstate with sections wide open for development will be a game changer for many communities.”

“Interstate 69 construction continues to progress north at a steady clip,” said Kevin Brinegar, chair of the Hoosier Voices for I-69 Board of Directors. “Today’s opening of I-69 Section 4 is the first, important link in establishing a direct, four-lane that connects Evansville and Indianapolis with the global economy.”

Although Section 4 is now open to traffic, I-69 construction continues. Inspections and punch-list items will require occasional lane closures into 2016 between Crane and Bloomington. Traffic should expect delays at traffic shifts and lane closures as State Road 37 is upgraded to I-69 from Bloomington to Martinsville.

For more about the I-69 extension in southwest Indiana, visit www.i69indyevn.org, and a video to assist in navigating the new roundabout interchange can be found here: https://youtu.be/x70zD6ntRuU

Aerial footage of the new I-69 section, including 360-degree views of exits and major bridges can be found at https://youtu.be/41Pqh2DHsK4.

Attached are photos from today’s ceremony.