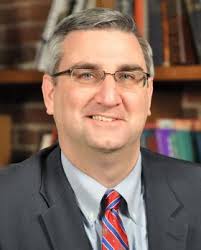 Thanks Lieutenant Governor Sue Ellspermann for Exceptional Service to the State

Indianapolis – Governor Mike Pence today announced his intention to nominate Eric Holcomb as the next lieutenant governor of Indiana, following current Lieutenant Governor Sue Ellspermann’s announcement that she will resign to pursue the position of president at Ivy Tech Community College.

“I’m pleased to announce my intention to name Eric Holcomb as my nominee for lieutenant governor for the state of Indiana,” said Governor Pence. “I have known Eric for nearly 20 years, and his integrity, character, and experience make him uniquely qualified for this new role. He is a man of character and distinction and I am confident he  will serve Hoosiers well as we continue our work to make Indiana a great place to live, work, and raise a family.

“I would like to thank Lt. Governor Ellspermann for her service and unmatched enthusiasm for our state. Sue has served Hoosiers and our administration with integrity and distinction. Throughout her tenure she steered numerous economic development initiatives including convening a Rural Broadband Working Group to pursue increasing internet connectivity throughout our state and leading an agricultural trade mission to Japan, South Korea and Taiwan. She also served as Vice Chair of the Indiana Career Council.”

“Janet and I could not be more excited and grateful to Governor Pence for this opportunity that will allow me to champion the kinds of policies that continue to strengthen our great state, ” said Eric Holcomb. “As we build upon our state’s economic momentum and confront the complex challenges before us, I look forward to working alongside Governor Pence as Indiana’s lieutenant governor to craft Indiana solutions to improve the lives of Hoosiers and move our state forward.”

“It has been a special honor for me to serve alongside a great Governor and share in all that we have accomplished to benefit the people of Indiana,” said Lieutenant Governor Sue Ellspermann.  “As I look forward to other opportunities for service, I am pleased that Eric Holcomb will become the next Lt. Governor.  Eric has a distinguished record of service to his nation and his State.  He understands State government from his work as Governor Daniels’ Deputy Chief of Staff and is ready to be a valuable partner with Governor Pence leading our State to even greater months and years ahead.”

The Governor’s nomination must be approved by majority votes in the House and Senate. Eric Holcomb’s biography can be found below.

Eric Holcomb has spent his career in public service.  His integrity, character, and conservative background make him uniquely qualified to serve as Lieutenant Governor of the State of Indiana.

Eric is a veteran of the United States Navy, serving at NATO’s Lisbon command center.  He has served governors, senators, and as chairman of the Indiana State Republican Party.

From 2003 to 2011, Eric serve Governor Mitch Daniels, including as his Deputy Chief of Staff and his campaign manager for his historic 2008 reelection campaign.  He authored the book, “Leading the Revolution” in 2012, which gives an insider’s view of the Mitch Daniels era in Indiana.  After serving in Governor Daniels’ administration he served as chairman of the Indiana Republican Party under Governors Daniels and Mike Pence.

Most recently he was a candidate for the seat of U. S. Senator Dan Coats, for whom he served as Chief of Staff.

Eric got his start in politics managing successful races for U.S. Congressman John Hostettler and a Mayoral race in Vincennes, where he lived at the time.

A graduate of Pike High School in Indianapolis and Hanover College in southeastern Indiana, Eric majored in U.S. History with a focus on the American Civil War and Reconstruction Era.

Eric is a member of the Indian Farm Bureau, the National Federation of Independent Business, the Indianapolis WWII Round Table, the American Legion; and is a board member of the Benjamin Harrison Presidential Site.

His wife, Janet, served as the Vice President of R and R Engineering, a family business going into its 47th year in operation, that manufactures and sells bolts and fasteners across the United States and Canada.  Janet is a certified NRA Basic Pistol Instructor and particularly enjoys teaching women to shoot.

Eric and Janet live with their dog, Henry, in Traders Point, Indiana.