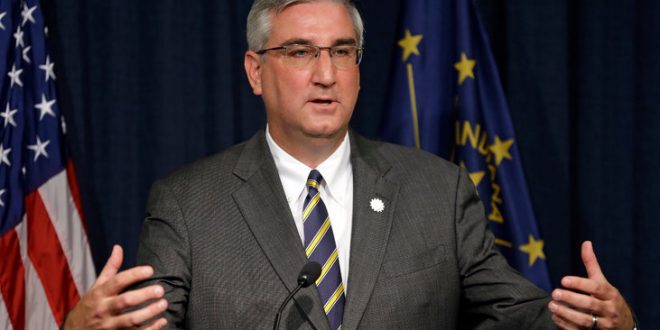 This week, the Governor and Secretary of Commerce Jim Schellinger led a delegation of Hoosier business leaders, government officials and economic development professionals to the 2017 International Paris Air Show, which is the largest aerospace event in the world. Indiana is home to more than 80 aerospace firms, and the aviation and defense industries employ approximately 57,000 Hoosiers.

“Indiana was front and center at the Paris Air Show this year,” said Governor Holcomb. “As a top state for aerospace manufacturing, this was a great opportunity to showcase our pro-growth business climate to a global audience of industry and government leaders. I’ve said I want to take Indiana to the world and bring the world to Indiana, and the meetings and connections made here at the air show are helping us to do just that.”

Governor Holcomb and members of the delegation met with leading executives of global firms in the industry, including companies interested in locating operations in Indiana as well as those with existing Indiana connections, such as:

While in Paris, the delegation also met with executives of France-based companies with Indiana operations, including Bollore Group, the parent company of BlueIndy; Faurecia, an automotive supplier that employs approximately 1,800 Hoosiers; and Michelin, which employs more than 1,200 associates at its BF Goodrich Tire manufacturing plant in Allen County.

Indiana is home to more than 800 foreign-owned business facilities, which employ 170,800 Hoosiers, ranking number 14 in the nation for jobs supported by foreign-owned firms. In 2016, Indiana exported nearly $9 billion of goods to Europe, accounting for 25 percent of the state’s total exports.

This concludes Governor Holcomb’s first international trade mission. He traveled to Hungary where he met with top government officials, including Prime Minister Viktor Orbán, Minister of National Economy Mihály Varga, and Minister of Foreign Affairs and Trade Péter Szijjártó, to discuss economic cooperation between Indiana and Hungary.  While in France, Governor Holcomb attended the 24 Hours of Le Mans auto race to strengthen Indiana’s automotive and motorsports sectors and debuted the state’s exhibit at the International Paris Air Show, showcasing the state’s aviation, aerospace and defense industry.

Previous Gov. Holcomb Makes Appointments to Boards and Commissions
Next FREE FUN ON THE FOURTH AT THE INDIANA HISTORY CENTER