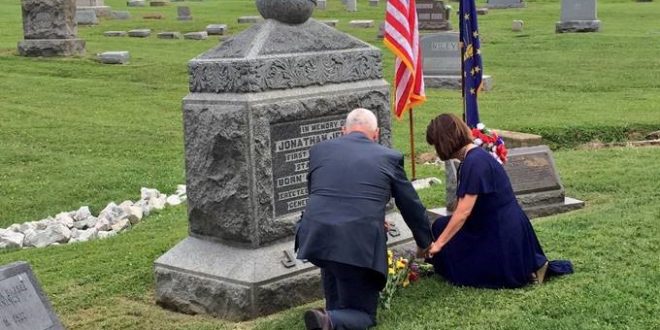 Indianapolis – Governor Mike Pence and First Lady Karen Pence, Indiana’s Bicentennial Ambassador, today joined the Indiana Archives and Records Administration (IARA) in Clark County for an event commemorating one of Indiana’s founders, Jonathan Jennings. At the event, the Governor offered remarks about the significance of former Governor Jennings’ role in the founding of Indiana, and the First Lady spoke about the various activities that Hoosiers in Clark and Harrison counties are planning to recognize the history in the two counties and to celebrate Indiana’s bicentennial across the state. Afterward, the Governor and First Lady laid a wreath on former Governor Jennings’ grave.

“As we celebrate Indiana’s bicentennial and all those who have contributed to our proud Hoosier heritage over the course of the last two hundred years, it is altogether fitting that we honor one of our state’s founders and our first governor, Jonathan Jennings,” said Governor Mike Pence. “We pay tribute to Jonathan Jennings and stand grateful for the vision and leadership he embodied in laying the foundation for our state. I encourage all Hoosiers during this time of reflection and celebration, to draw inspiration from historic leaders like Jonathan Jennings as we approach the dawn of our third century.”

The event, held by the Indiana Archives and Records Administration (IARA), marked the final ceremony in a series of graveside memorials honoring constitutional delegates buried in Indiana. The IARA events honoring the state’s founders are an officially endorsed bicentennial legacy project of the Indiana Bicentennial Commission.

Later in the day, Governor Pence and First Lady Karen Pence traveled to Corydon, Indiana’s first state capital, to participate in a ceremony marking the 200th anniversary of the 1816 Constitutional Convention, of which former Governor Jennings served as president alongside 42 other delegates from around the then-Indiana Territory. As part of the ceremony, the Governor and First Lady carried the 1816 and 1851 constitutions out of the State Capitol Complex, where they have been on display since early June in the same place where they were completed and signed. 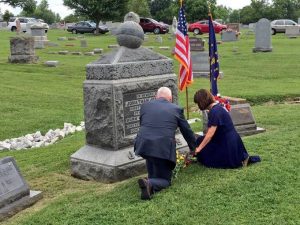 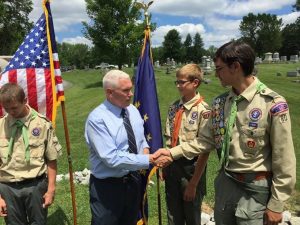 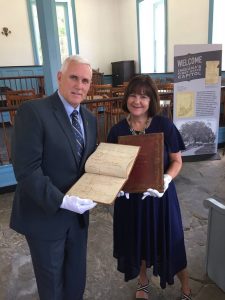 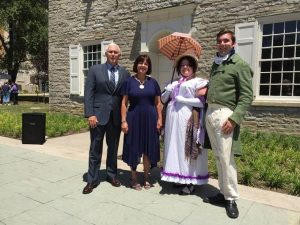 I play on the radio from 7 am -1 pm weekdays on 98.9 FM WYRZ and WYRZ.org. Follow me on twitter @WYRZBrianScott or e-mail me at brian@wyrz.org.
Previous Town of Brownsburg reminds residents to follow fireworks laws and safety guidelines
Next Donnelly, Hoosiers Discuss Challenges and Opportunities for Rural Communities