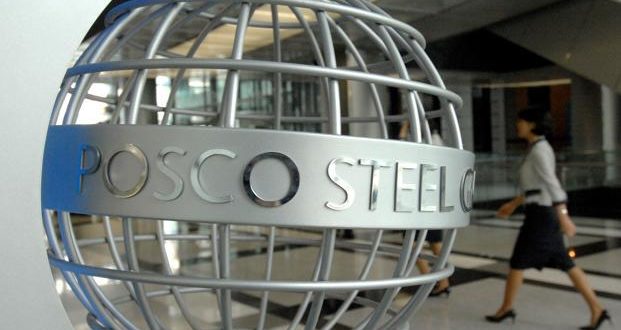 Indianapolis – POSCO, a multinational company headquartered in Pohang, South Korea, and the fifth-largest steel producer in the world, has announced plans to build a wire rod processing center at the Port of Indiana-Jeffersonville, creating up to 60 high-wage jobs by 2018. POSCO is South Korea’s fourth largest company, behind Samsung Electronics, SK Holdings and Hyundai Motors, and is ranked No. 162 in Fortune’s Global 500.

“Although we are located on different continents, South Korea and Indiana both share a reputation of excellence when it comes to advanced manufacturing,” said Governor Mike Pence. “Having a globally-focused company like POSCO select Indiana to grow its business is a strong endorsement of our state’s low-cost, low-tax business climate, robust transportation infrastructure and dynamic port system. This company could have established operations anywhere in the world, but has found exactly what it needed right here in Indiana. POSCO is a major supplier to the automotive industry which already supports more than 100,000 jobs in our state, and we look forward to the new jobs this state-of-the-art facility will create.”

The $19 million project includes a 136,000-square-foot facility to be constructed on approximately 10 acres at the Port of Indiana-Jeffersonville. POSCO plans to start construction later this year on the facility, which will be the company’s second steel processing line and fourth production line in the U.S. POSCO’s key drivers for locating at the port were the ability to ship steel into the Midwest by water, the close proximity to numerous steel and automotive-related companies and the attractive business environment in the Jeffersonville area.

“We are very excited about the opportunity to develop our first Midwestern U.S. plant at the Port of Indiana-Jeffersonville,” said POSCO AAPC Finance Director Kyu Tae Kim. “It is critical for our business to receive cargo by water and to be centrally located in the U.S. market. The Jeffersonville’s port location will allow us to connect with global markets and supply our U.S. automotive customers with ‘just-in-time’ deliveries. We want to thank the State of Indiana, the City of Jeffersonville, the Ports of Indiana and One Southern Indiana for helping us to make this project a reality.”

POSCO was established in South Korea in 1968 and was the first Korean firm to be listed on the New York Stock Exchange in 1994. It operates 312 facilities in 43 countries around the world. POSCO’s Jeffersonville plant will process steel wire for fasteners, nuts and bolts used in the automotive industry and serve as a distribution center for other POSCO products. POSCO America, incorporated in 1984, maintains its U.S. headquarters in Fort Lee, N.J., with additional facilities in Houston, Texas, Troy, Mich., and McCalla, Ala. POSCO operates two integrated steel mills in South Korea and a joint venture facility with U.S. Steel, USS-POSCO Industries, located in California.

“POSCO’s planned facility is a good fit for our port and its operations will create new business for other port companies,” said Rich Cooper, CEO for the Ports of Indiana. “Steel processors at our port currently supply components for all six of the top U.S. automakers as well as to many Tier 1 suppliers and other participants in the automotive industry’s supply chain. The port’s multimodal transportation options, including year-round barge access to the Gulf of Mexico, offer significant logistics cost savings for POSCO.”

The Port of Indiana-Jeffersonville is home to 28 businesses, including a “steel campus” of 12 metal-processing companies serving the Midwest auto and appliance industries. The port handled over one million tons of steel cargoes in 2015 and 2.8 million in total shipments.

The Indiana Economic Development Corporation (IEDC) offered POSCO up to $550,000 in conditional tax credits and up to $50,000 in training grants based on the company’s job creation plans. These incentives are performance-based, meaning until Hoosiers are hired, the company is not eligible to claim incentives. Jeffersonville’s city council approved additional incentives at the request of the Jeffersonville Redevelopment Commission.

“Having a global company of POSCO’s caliber select Southern Indiana and, specifically, the Port of Indiana-Jeffersonville, for this advanced manufacturing project, is certainly cause for celebration,” said Jeffersonville Mayor Mike Moore. “The opening of two new interstate bridges over the Ohio River and the continued development of our port are key drivers for attracting world-class companies like POSCO and helping them grow in our community. We are grateful to our partners in economic development, One Southern Indiana and the Indiana Economic Development Corporation, for their efforts to ensure that investing in Jeffersonville is a seamless process.”

I play on the radio from 7 am -1 pm weekdays on 98.9 FM WYRZ and WYRZ.org. Follow me on twitter @WYRZBrianScott or e-mail me at brian@wyrz.org.
Previous IMPD Investigates Homicide in the 3200 Block of North Campbell Avenue
Next Pay Now to Minimize Penalty and Interest