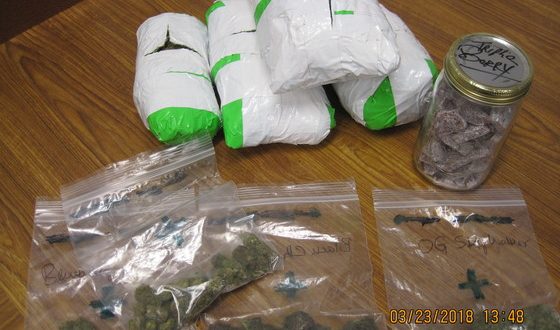 Putnam County—This morning at approximately 10:00, an Indiana State Police Trooper from the Putnamville District, spotted a 2018 Ford Expedition SUV following another vehicle too closely on eastbound Interstate 70 near the 36 mile marker. The SUV was stopped and several indicators of possible criminal activity were noted, including a positive alert by a Putnam County Sheriff’s Office K-9.

Both were incarcerated in the Putnam County Jail on preliminary charges of Dealing Marijuana (felony).

The case was investigated by the Indiana State Police with assistance from the Putnam County Sheriff’s Office.

I play on the radio from 7 am -1 pm weekdays on 98.9 FM WYRZ and WYRZ.org. Follow me on twitter @WYRZBrianScott or e-mail me at brian@wyrz.org.
Previous Donnelly’s Bipartisan Addiction Treatment Workforce Bill, Resources to Combat Opioid Abuse Signed Into Law as Part of Government Funding Legislation
Next One person dead after weekend shooting at Meijer store