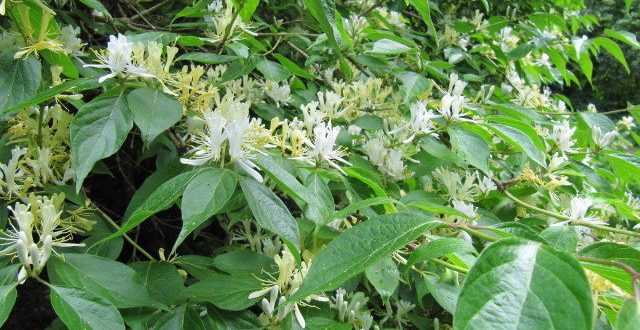 Back in the 1950s, the flower-and-berry-covered shrub was introduced throughout Midwestern urban areas, promoted by the USDA Soil Conservation Service (now known as the Natural Resources Conservation Service) as a beneficial plant that would grow quickly, help stabilize soil, and reduce erosion.

“But it turns out that it spreads too quickly,” Dolan explains. “It got out of control. And it creates a monoculture of one species that blocks out native plants that are more valuable in the landscape from an ecological perspective.”

When city leaders recognized the invasive nature of the honeysuckle, several organizations started removing the shrubs on a large scale. Dolan retired from Butler last year, but she has continued her decades-long study of this species and the ongoing efforts to eliminate it from areas around the city. Most recently, she received a $7,500 grant from the Virginia B. Fairbanks Art & Nature Park at Newfields to assess the progress of ecological restoration that began there in the early 2000s.

Dolan first started research at the Art & Nature Park in 2002, when she was hired by Indy Greenways to inventory vegetation near what is now the Central Canal Towpath. Then in 2004, as the Indianapolis Museum of Art was taking over the Art & Nature Park, Dolan worked with Butler Biological Science Professor Travis Ryan, Herbarium Assistant Marcia Moore, and Biological Science Professor Carmen Salsbury to conduct additional vegetation and wildlife surveys in the area. Now, Dolan and Moore are going back to see what’s changed.

To do this, the researchers will tally and analyze the plant species along five transects—or linear sections of land—that were examined in the original study. Dolan will compare the findings with data gathered in 2004, assessing what has changed in the quality of the habitat as a result of restoration efforts.

She hopes to determine whether the honeysuckle removal has been successful: Is the plant gone, or are there still traces that could grow back? And if it has been eliminated, what’s replacing it? Are desirable native species coming in strong, or has it just been replaced by another kind of invader?

When invasive plant species take over an area, Dolan says it affects everything living there. For example, the honeysuckle makes nesting more difficult for Indy’s native birds, and its berries aren’t healthy to eat.

“It’s like fruit candy for the birds,” she explains, “whereas our native shrubs, like spicebush, produce berries that are high in oils—a better energy source for birds that are going to migrate back south in the winter.”

The honeysuckle also drives away pollinator insects that specialize in native plants.

“When the native plants go—the spring wildflowers and the native shrubs—then those specialist insects lose their hosts,” Dolan says. “It cascades down, and then the birds that would eat the insects don’t come to the area. And it continues on.”

Invasive plants disrupt habitats in ways that threaten ecological resilience. This can lead to problems such as flooding or erosion. Contrary to what people thought when Amur honeysuckle was first introduced, the plants don’t stabilize the soil at all. Their roots are too shallow, and their leaves block a lot of sunlight from getting to the soil. This, combined with chemicals released from the honeysuckle’s leaves and roots, prevents many native plants from growing.

So, are efforts to remove the honeysuckle working?

Dolan has yet to analyze data from Newfields—that report will be finished by the end of 2019. But she has been conducting similar research over the last five years in areas along Indy’s Fall Creek, where the nonprofit group Keep Indianapolis Beautiful had organized a community project to remove the honeysuckle invading there.

According to Dolan’s findings, the richness of the area’s plant life has more than doubled since 2012, mostly with native species. While overall habitat quality has shown some improvement, seeds brought in by wind and animals introduced eight new invasive plants.  Early detection of these invasives will make controlling them easier, and she will continue monitoring the area.

At Newfields, junior Butler Biology major Torey Kazeck had the chance to help collect data over three weeks at the end of the summer. As she plans to pursue a PhD after graduating, she was excited to gain more hands-on experience in the field.

“I hope this work helps the community see what invasive species do, and why we should remove them,” Kazeck says.

Few similar studies existed before Dolan’s surveillance of honeysuckle removal, especially near urban waterways, despite evidence of the harmful impacts invasive shrubs can have in these environments. Because soil health along rivers and streams can impact water quality, Dolan—who was on the Ecology Committee for Reconnecting to Our Waterways—saw the importance of documenting the restoration process.

During much of her time at Butler, Dolan focused on traveling to rural areas to study rare plants. But when she started seeing the value of looking at what was in her own backyard, she got more involved with urban flora research. She says more urban communities are starting to see how protecting local ecosystems can help defend against climate change effects. While Indianapolis doesn’t deal with more obvious problems like sea level rise, the city does have issues with flooding, erosion, and heat. Establishing more green spaces in urban areas can reduce these threats, Dolan says, but that will only work if the plants filling those spaces can get along with one another.

I play on the radio from 7 am -1 pm weekdays on 98.9 FM WYRZ and WYRZ.org. Follow me on twitter @WYRZBrianScott or e-mail me at brian@wyrz.org.
Previous Indiana State Police Husband and Wife Announce Their Retirements
Next Applications Being Accepted for Danville Chamber of Commerce Executive Directorship Opening