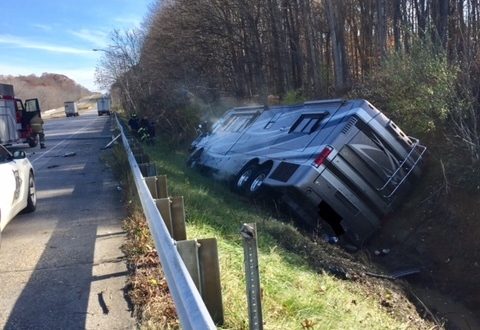 Vigo County—Nov 20, 2017–This morning at 10:36, Indiana State Police and Vigo County emergency agencies responded to an RV (Recreational Vehicle) crash in the eastbound lanes of Interstate 70 near the two mile marker. The crash left the elderly driver deceased at the scene.

Preliminary investigation revealed a 2006 RV was eastbound on I-70 near the 2mm, when the RV suddenly left the roadway on the south side and struck a guiderail. During the impact, the driver was ejected through the front windshield and pronounced deceased at the scene.

The victim was identified as 77-year-old Richard D. Harris of Herrin, Illinois. His family has been notified.

Early indications have led investigators to believe that a right front tire failure caused this crash.

I play on the radio from 7 am -1 pm weekdays on 98.9 FM WYRZ and WYRZ.org. Follow me on twitter @WYRZBrianScott or e-mail me at brian@wyrz.org.
Previous IMPD Homicide detectives investigating after man found dead in residence
Next Fortune 100 Company to Grow 400 Jobs in Central Indiana