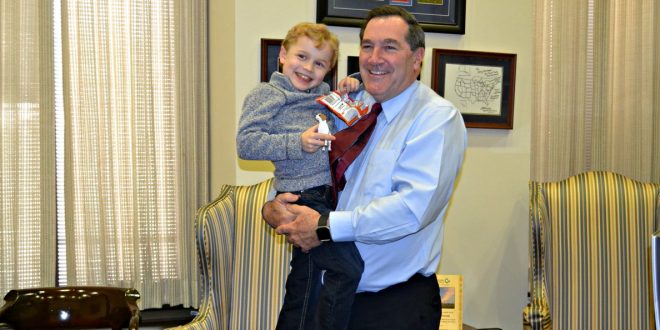 President Trump expressed support for ‘Right to Try’ legislation during his State of the Union earlier this year, and Donnelly brought up and talked with Vice President Pence about the importance of Congress passing his bipartisan ‘Right to Try’ bill during a meeting last month.

Donnelly said, “Today’s vote in the House moves us one big step closer to getting my bipartisan ‘Right to Try’ legislation across the finish line. I look forward to President Trump signing it into law as soon as possible. Families in Indiana and across the country deserve the right to try and access potentially life-saving, clinically tested medical treatment to treat terminally ill loved ones before time runs out.”

Donnelly first met Indianapolis resident Laura McLinn and her son Jordan McLinn—who has Duchenne muscular dystrophy, a disease with no cure—in early 2016. Donnelly has met with the McLinn family many times and worked closely with them to advance this legislation.

In October 2017, Donnelly and Johnson sent the House Energy and Commerce Committee a letter urging it to pass the bill. The Donnelly-Johnson bill that passed the Senate in August can be found here. Food and Drug Administration (FDA) Commissioner Scott Gottlieb recently announced his support for the Donnelly-Johnson ‘Right to Try’ legislation.

I play on the radio from 7 am -1 pm weekdays on 98.9 FM WYRZ and WYRZ.org. Follow me on twitter @WYRZBrianScott or e-mail me at brian@wyrz.org.
Previous Secretary of State Connie Lawson Orders Online Cryptocurrency Promoter to Stop Offering Unregistered Securities in the State
Next Donnelly’s Bipartisan Regulatory Relief Package Passes House, Heads to President Trump’s Desk