Washington, D.C. – Today, U.S. Senator Joe Donnelly met with Major General Courtney P. Carr, the new Adjutant General of the Indiana National Guard. Donnelly and Carr discussed a range of issues, including the importance of the Indiana National Guard to our state and country, as well as the Fort Wayne 122nd Fighter Wing’s recent deployment in conducting targeted airstrikes against ISIS.

Donnelly, who serves on the Senate Armed Services Committee, said, “Today, I had a great meeting with our new Adjutant General. Hoosiers have a long and proud tradition of serving our country, and I look forward to working with Major General Carr as he leads our Indiana National Guard.” 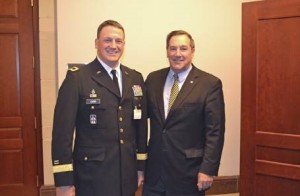 Donnelly is Ranking Member on the Strategic Forces Subcommittee of the Senate Armed Services Committee and recently returned from travel to Iraq, South Korea, and China, where he met with Hoosier servicemembers, U.S. military leaders, and government officials.

I play on the radio from 7 am -1 pm weekdays on 98.9 FM WYRZ and WYRZ.org. Follow me on twitter @WYRZBrianScott or e-mail me at brian@wyrz.org.
Previous Donnelly: Early Childhood Learning Critical for Each Child’s Long-Term Success
Next Governor Pence Applauds Amazon’s Decision to Add 2,000 Jobs to Indiana