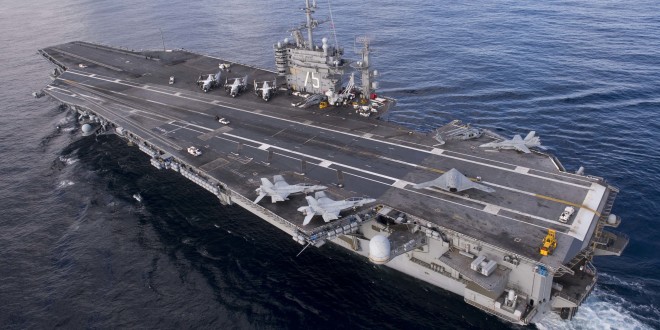 Manama, Bahrain — U.S. Senator Joe Donnelly was in Bahrain on the latest stop of the congressional delegation he is leading this week in the Middle East, as part of his work on the Senate Armed Services Committee. Donnelly and the delegation met with U.S. Navy leadership and servicemembers, including Hoosiers, to discuss regional threats in the Middle East. During the visit, Donnelly met servicemembers aboard the USS Harry S. Truman, an aircraft carrier deployed in the Persian Gulf.

Donnelly, Ranking Member of the Senate Armed Services Subcommittee on Strategic Forces, said, “Across the Persian Gulf, our Navy is projecting American power and countering threats from our adversaries that impact the stability of the Middle East and our national security. This was a valuable opportunity to hear from Hoosier servicemembers aboard the USS Harry S. Truman and from our commanders in the region about the challenges they face and the work they are doing.”

The trip to Bahrain comes after Donnelly and the delegation have traveled to Israel and the United Arab Emirates (U.A.E.). In Israel, Donnelly met with Prime Minister Benjamin Netanyahu and visited several military sites to get an update on the country’s missile defense systems and joint missile defense efforts with the U.S. Donnelly also met with Israel Defense Force (IDF) soldiers and the U.S. Ambassador to Israel Daniel Shapiro. In the U.A.E., Donnelly met with U.S. and Emirati defense leaders and visited military sites focused on missile defense.

Donnelly is Ranking Member of the Senate Armed Services Subcommittee on Strategic Forces, which oversees U.S. missile defense programs, as well as U.S.-Israel collaborative missile defense programs. As part of his continued support for critical missile defense efforts, Donnelly and Senator Jeff Sessions (R-AL), Chairman of the Senate Armed Services Strategic Forces Subcommittee, recently sent a bipartisan letter to President Obama. Donnelly and Sessions highlighted the importance of investments in U.S. missile defense capabilities, and the need to strengthen our partnerships with allies around the world, particularly Israel.

I play on the radio from 7 am -1 pm weekdays on 98.9 FM WYRZ and WYRZ.org. Follow me on twitter @WYRZBrianScott or e-mail me at brian@wyrz.org.
Previous Standard and Poor’s Reaffirms Indiana’s AAA Credit Rating
Next Danville Police Department Releases March Crime ‘Heat Map’