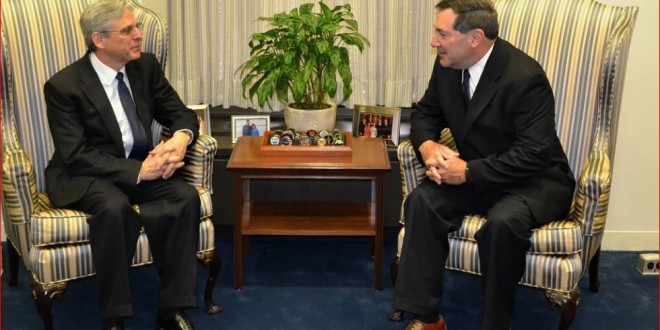 Washington, D.C. — Today, U.S. Senator Joe Donnelly released the following statement after he met with Judge Merrick Garland, who has been nominated for the vacancy on the Supreme Court. Donnelly and Garland discussed Garland’s experience as a judge and his earlier work for the Justice Department.

Donnelly said, “Judge Garland and I had a substantive conversation. I had the chance to get to know him, ask him questions, and learn about his time on the D.C. Circuit, and views on the role of the Court.  I was impressed with his deep knowledge of the law and his commitment to public service and our country.

“Part of my job as a Senator is to meet with and thoroughly consider judicial nominees. I hope my Senate colleagues will do their jobs and meet with Judge Garland, ask him questions, learn about his record and his temperament, and then hold hearings and an up or down vote on his nomination.”

I play on the radio from 7 am -1 pm weekdays on 98.9 FM WYRZ and WYRZ.org. Follow me on twitter @WYRZBrianScott or e-mail me at brian@wyrz.org.
Previous US 36 Lane Restrictions Near Danville Begin the first of April
Next IMPD investigating person shot on the West side of Indianapolis