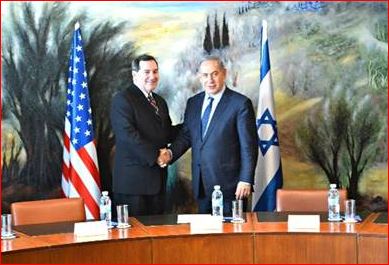 Jerusalem, Israel — U.S. Senator Joe Donnelly, who serves on the Senate Armed Services Committee, is leading a congressional delegation overseas in the Middle East this week and was in Israel on the first stop of the trip. He and the delegation met with Israeli Prime Minister Benjamin Netanyahu and visited several military sites to get an update on the country’s missile defense systems and joint missile defense efforts with the U.S. Donnelly and the group also met with U.S. Ambassador to Israel Daniel Shapiro and members of the Israeli Defense Forces (IDF).

Donnelly said, “This was an important opportunity to meet with Prime Minister Netanyahu and reaffirm the importance of the close bond and strategic relationship our nations share. Missile defense collaboration is a critical element of our partnership with Israel, and we must continue to support and strengthen efforts that advance our shared security interests.”

As part of his continued support for these critical missile defense efforts, Donnelly and Senator Jeff Sessions (R-AL), Chairman of the Senate Armed Services Strategic Forces Subcommittee, recently sent a bipartisan letter to President Obama. Donnelly and Sessions highlighted the importance of investments in U.S. missile defense capabilities and the need to strengthen our partnerships with allies around the world, particularly Israel.

I play on the radio from 7 am -1 pm weekdays on 98.9 FM WYRZ and WYRZ.org. Follow me on twitter @WYRZBrianScott or e-mail me at brian@wyrz.org.
Previous Brownsburg Town Council Adopts New Policy for Events Held on Town Property
Next FSSA announces 20 recipients of new 2-Year Early Education Matching Grants