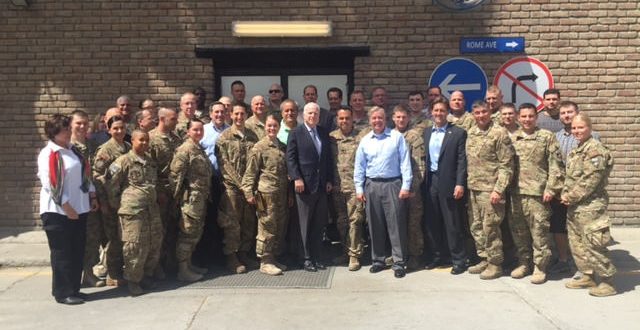 Donnelly Focuses on Counterterrorism Efforts on Bipartisan Trip to Afghanistan, Pakistan, and Israel

Donnelly, who serves on the Senate Armed Services Committee, said, “Terror attacks on our homeland are often inspired or orchestrated by violent extremist groups based overseas. I traveled to Israel, Pakistan, and Afghanistan to discuss shared security concerns with foreign leaders and review U.S. and partner nation counterterrorism operations firsthand.

“While we face complex security challenges, what I saw on this trip confirmed without a doubt that our nation has the best, most advanced military in the world, working every day to keep us safe. I had the honor of spending Independence Day with some of the brave Hoosiers deployed now in Afghanistan, protecting our security, and defending our freedoms. We owe these men and women a tremendous debt of gratitude for their service.

“It is also clear that in order to defeat violent extremism, we need a coherent, comprehensive counterterrorism strategy, both at home and abroad.”

In Afghanistan, Donnelly visited Hoosier servicemembers at Camp Resolute Support in Kabul, participated in a promotion and re-enlistment ceremony with troops, and met with American servicemembers training the Afghan Air Force and other elements of the Afghan security forces. Donnelly  and the delegation met with Afghan President Ashraf Ghani and Chief Executive of Afghanistan Abdullah Abdullah. He also spoke with U.S. leaders, including General John Nicholson, commander of the Resolute Support mission and U.S. forces in Afghanistan, and U.S. Ambassador to Afghanistan Michael McKinley, about the status of the international military mission.

In Pakistan, Donnelly and the delegation met with the country’s civilian and military leadership, including Pakistan’s Chief of Army Staff General Raheel Sharif to discuss ongoing counterterrorism operations in the region. Donnelly also traveled to Miram Shah in North Waziristan, once a hotbed of terrorist activity, to review Pakistan’s frontline efforts to improve security along the Afghanistan-Pakistan border.

In Israel, Donnelly and the delegation met with Israeli Prime Minister Benjamin Netanyahu and discussed the U.S.-Israel counterterrorism partnership, including ongoing negotiations on a new 10-year security military aid package between the U.S. and Israel.

I play on the radio from 7 am -1 pm weekdays on 98.9 FM WYRZ and WYRZ.org. Follow me on twitter @WYRZBrianScott or e-mail me at brian@wyrz.org.
Previous Senator Coats Seeking Fall Internship Applications; Deadline is July 15th
Next Coats Supports Bills to Enforce and Strengthen Immigration Laws