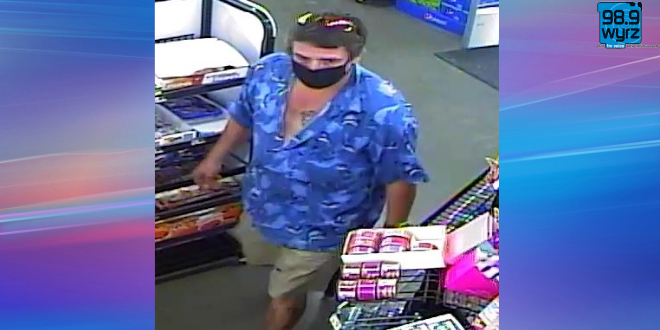 Danville, IN – The Danville Metropolitan Police Department is seeking assistance from the public with identifying a vehicle break-in suspect from October 3rd. The suspect broke out a window of a locked vehicle at a trailhead in Danville, then stole a woman’s purse from inside. The suspect subsequently used her credit cards in Stilesville, Greencatle, and Cloverdale at various locations.

The same suspect is wanted for questioning in reference to vehicle break-in’s in Hamilton County, Newcastle, Pendleton and two additional cases at parks with the Department of Natural Resources.

The suspect was captured on video driving a red older-model Dodge Durango. He has distinctive tattoos on both lower legs, and another tattoo on his left upper chest. If you know who the male is, you’re asked to contact the Danville Metropolitan Police Department’s 24-hour 100% anonymous crime-tip line at (317) 745-3001, or by contacting Crime Stoppers of Central Indiana. Please reference case HP200007179.

REMINDER! ALL suspects are innocent until proven guilty in a court of law.

I play on the radio from 7 am -1 pm weekdays on 98.9 FM WYRZ and WYRZ.org. Follow me on twitter @WYRZBrianScott or e-mail me at brian@wyrz.org.
Previous 500 Festival Launches New Virtual Fitness Challenge: Hoosier Holiday Challenge, presented by Khamis Fine Jewelers, benefitting Gleaners
Next IMPD Covert Robbery Detectives arrest man and woman for a series of robberies