WASHINGTON, DC – Senator Dan Coats (R-Ind.), the Chairman of the Joint Economic Committee, delivered his weekly “Waste of the Week” speech and highlighted $150 million spent by the Task Force for Business Stability Operations, a Pentagon business advocacy agency, on villas in Afghanistan. Established in Afghanistan for a valid purpose – to encourage foreign investment – this task force spent millions on private housing for staff, instead of utilizing existing Department of Defense (DOD) bases.

“Contracting for security is one thing, but contracting for personal room service in a privately owned villa is a completely different story,” said Coats. “What the IG found was a lack of cost consideration, accountability and oversight.” 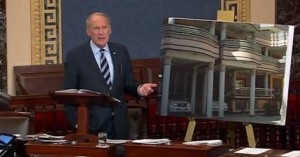 Coats said the IG report noted that the exorbitant costs of the villas are especially concerning because the task force staff could have lived at DOD facilities in Afghanistan “where housing, security, and food service are routinely provided at little or no extra charge to DOD organizations.”

More broadly, the IG noted that poor oversight and a complete lack of coordination with other agencies in Afghanistan caused so much friction that “even the U.S. civilian personnel most supportive of the Task Force’s activities” reported the need for oversight and coordination of the task force.

Click here to watch Coats speak on the Senate floor.

I play on the radio from 7 am -1 pm weekdays on 98.9 FM WYRZ and WYRZ.org. Follow me on twitter @WYRZBrianScott or e-mail me at brian@wyrz.org.
Previous Indiana establishes six commercial courts
Next Brownsburg Hires Town Engineer