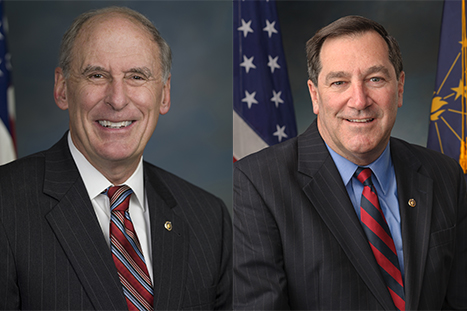 In their letter, the senators write, “whether we are cheering for the Indiana Hoosiers on the basketball court, hiking the Hoosier National Forest, or inviting friends over for some Hoosier Hospitality, we have always called ourselves Hoosiers…The Hoosier moniker has endured since our state’s beginnings, and we urge you to consider its inclusion in the GPO’s next Style Manual.”
The full letter is below:

Dear Chairman Abramson and Members of the Style Board:

As you work to complete the U.S. Government Publishing Office’s 2016 Style Manual, we write to encourage you to consider changing the designation of natives of the State of Indiana to “Hoosiers.”  We appreciate your consideration.

For more than 180 years, the residents of Indiana have proudly called themselves Hoosiers.  References to the term can be found in private correspondences, travel reminiscences, and local newspapers as early as 1826.  However, it was not until John Finley, a poet from Richmond, Indiana, wrote “The Hoosier’s Nest” that the term increased in appearance and general acceptance.

In one stanza, Finley wrote,

…The emigrant is soon located,

In Hoosier life initiated: Erects a cabin in the woods,

Wherein he stows his household goods…”

This famous poem was widely circulated throughout the country and even abroad.  While Finley never explained what that term meant, his poem defined and solidified Indiana’s identity for those unfamiliar with this western land, and it instilled pride in the citizens of this new state.

Since that time, the term Hoosier has been embraced by the citizens of Indiana and continues to represent friendliness, neighborliness, and pride in the Indiana way of life.  Although the 2008 Style Manual’s use of “Indianian” may follow established style precedent for naming the natives of a state, Indiana residents do not use this word.  In fact, we find it a little jarring to be referred to in this way.

Our official state website notes that we are known as “The Hoosier State,” and the Merriam-Webster dictionary defines Hoosier as “a native or resident of Indiana.”  Amtrak’s Hoosier State line carries passengers through the Indiana countryside.  Indiana’s rich agricultural history is celebrated with the Hoosier Homestead Award Program, and the Hoosier Riverwatch program is a testament to our state’s commitment to our environment and water quality.  As you can see, whether we are cheering for the Indiana Hoosiers on the basketball court, hiking the Hoosier National Forest, or inviting friends over for some Hoosier Hospitality, we have always called ourselves Hoosiers.

As Meredith Nicholson wrote in 1912, “The origin of the term ‘Hoosier’ is not known with certainty.  But certain it is that…Hoosiers bear their nickname proudly.”  Regardless of its roots, the Hoosier moniker has endured since our state’s beginnings, and we urge you to consider its inclusion in the GPO’s next Style Manual.

I play on the radio from 7 am -1 pm weekdays on 98.9 FM WYRZ and WYRZ.org. Follow me on twitter @WYRZBrianScott or e-mail me at brian@wyrz.org.
Previous Coats, Senate Finance Committee Members Call for Effective Trade Enforcement to Combat Market-Distorting Policies
Next Lt. Governor Eric Holcomb joins students for My Community, My Vision Final Event