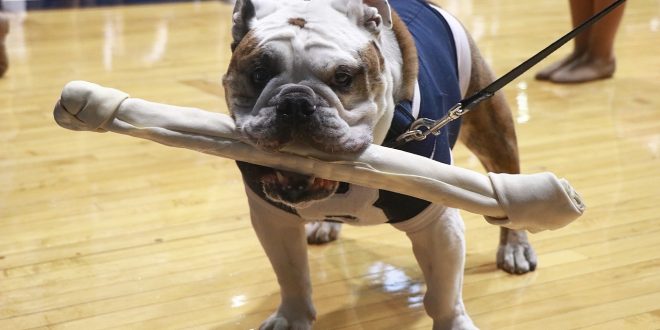 After eight years of greeting potential students with the news of their admission to Butler University, running down bones at Hinkle Fieldhouse to officially get basketball games started, and serving as Butler’s all-around ambassador, Butler Blue III will retire at the end of the 2019-2020 academic year.

It turns out Butler Blue III, also known as Trip (short for Triple), is a lot like us humans. The American Kennel Club-registered English bulldog is hanging up his mascot duties because of his older age (for bulldogs), long tenure on the job, and desire to start the next chapter of his life.

“While he loves to work and enjoys being the Butler Bulldog, it’s time,” says Trip’s caretaker and Butler’s Director of External Relations, Michael Kaltenmark. “The average lifespan of an English bulldog is 8-to-12 years, and now that Trip is entering that range, we want to make sure he gets to enjoy the simple pleasures of life as just our family dog.”

Kaltenmark and his colleagues will be working closely with Butler graduate and local veterinarian Dr. Kurt Phillips to identify Trip’s successor, Butler Blue IV. Upon arrival of Blue IV, Butler graduate and current Marketing Specialist Evan Krauss ‘16 will take over caregiving and training duties. Kaltenmark, who has devoted the last 16 years to the care of Butler Blue II and III, will still work closely with Krauss, but will primarily focus on his external relations work.

Trip has been part of Kaltenmark’s household since he was adopted in early 2012 at 7 weeks old. He will remain with the family during retirement. Kaltenmark has been on staff at Butler since graduating from the University in 2002, and he cares for Trip along with his wife Tiffany and his sons Everett (9) and Miles (5).

But before Kaltenmark and Trip hang up the leash, they’re embarking on a farewell tour, or One Last Trip. Throughout the academic year, Trip will appear at Butler games and various events on campus, and he will even follow the Men’s Basketball team on the road to surprise several prospective students and to visit graduates.

“This year is really an opportunity for the Butler community and our fans to celebrate Trip and his service as mascot,” Kaltenmark says. “He has served Butler so admirably all of these years, and we want to send him off with a proper farewell.”

Some of Trip’s remaining highlights include stops in Chicago, Washington DC, Milwaukee, and New York. But first up is Butler’s Homecoming weekend, including Trip’s role as host of the 19th annual Butler Bulldog Beauty Contest on Saturday, October 26. Further announcements about the arrival and debut of Butler Blue IV will be forthcoming. In the meantime, fans can continue to follow Trip and his #OneLastTrip experiences on Twitter, Instagram, Facebook, and YouTube.

I play on the radio from 7 am -1 pm weekdays on 98.9 FM WYRZ and WYRZ.org. Follow me on twitter @WYRZBrianScott or e-mail me at brian@wyrz.org.
Previous October Schedule Adjustments for IndyGo Routes Include Red Line
Next State of Indiana announces $3 million in funding to support launch of comprehensive addiction recovery networks