Indiana’s seasonally adjusted unemployment rate, a U.S. Bureau of Labor Statistics (BLS) indicator that reflects the number of unemployed people as a percentage of the labor force, rose by 0.2 percent over the previous month to 5.2 percent in April. This slight uptick is directly correlated to the large influx of Hoosiers joining the labor force. Additionally, initial unemployment insurance claims remain at their lowest level since the early 1970s.

“More than 80,000 Hoosiers joined the workforce in the last four months, which doubles Indiana’s labor force growth for all of 2015,” said Steven J. Braun, Commissioner of the Indiana Department of Workforce Development. “Correspondingly, nearly 60,000 more Hoosiers joined the employed ranks in 2016. This suggests Hoosiers are increasingly confident in finding gainful employment.” 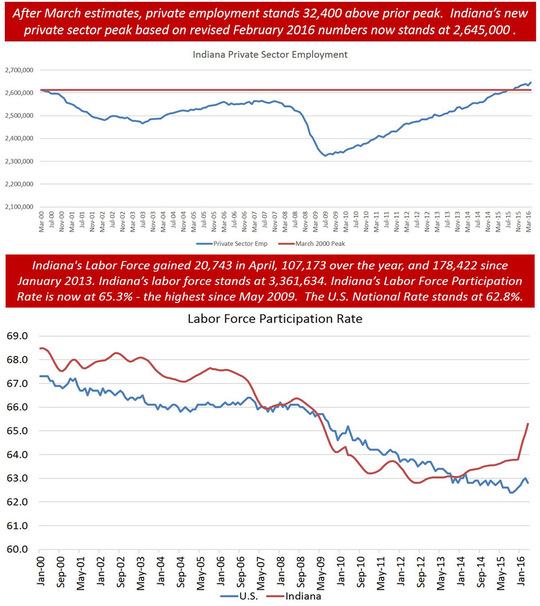 The highest levels of growth occurred in the Manufacturing (3,300), Trade, Transportation and Utilities (3,300), Professional & Business Services (2,700) and Private Education & Health Services (1,900) sector. Gains in seven of Indiana’s nine major industry sectors were only slightly offset with small losses in Government (-1,000) and All Other (-1,700). Over the past three years, Indiana’s private sector has grown by nearly 152,000 jobs.

I play on the radio from 7 am -1 pm weekdays on 98.9 FM WYRZ and WYRZ.org. Follow me on twitter @WYRZBrianScott or e-mail me at brian@wyrz.org.
Previous Coats Named “Fiscal Hero” by Campaign to Fix the Debt
Next Indiana Economy Sets New Employment Record in April